A company’s push to mine minerals near the Okefenokee National Wildlife Refuge is drawing parallels to a proposal 20 years ago near the southeast Georgia sanctuary that generated national attention.

Twin Pines Minerals is hosting two public hearings in south Georgia next week, Aug. 13 in Folkston and Aug. 14 in St. George, about its plans to mine 2,414 acres in the first phase of a 12,000 acre project. The Georgia Conservancy and other environmentalists raised concerns about the Alabama company’s application to the U.S. Army Corps of Engineers soon after it was filed in July.

For many, the Twin Pines Minerals’ mining application brings back memories of a DuPont proposal in the 1990s to mine near the National Wildlife Refuge in Charlton County, even though the scope of the new plan is much smaller.

DuPont pulled its request in 1999 to strip-mine titanium from 38,000 acres near the boundary of the Okefenokee after intense pressure from environmental groups and the federal government.

Staunch opposition from then-U.S. Secretary of the Interior Bruce Babbitt and the extensive scope of the plans and ecological risks it posed led to the demise of DuPont’s plans.

Value above and below the surface

Located along the Georgia-Florida border, the Okefenokee wetlands are home to more than 600 plant species as well as rare animals like indigo snakes, gopher tortoises and wood storks.

The Okefenokee Swamp is also the headwater to the St. Marys River, which flows into the Atlantic Ocean, and the Suwannee River that lets out in the Gulf of Mexico.

For DuPont and Twin Pines, the stuff that lies beneath the surface at the Trail Ridge is what’s most valuable. Titanium dioxide, which helps turn products like paint and toothpaste white, is the treasure they’re after.

There are some similarities, but also some stark differences between the Twin Pines’ proposal and DuPont’s plans in the 1990s, according to several people with knowledge of both plans.

“Had DuPont come here and said, ‘We want to mine 3,800 acres,’ they could have,” said Chip Campbell with Okefenokee Adventures. “It was the magnitude of the project, the scope of the project that made it a non-starter to me.”

But DuPont proposed to mine 38,000 acres, which was hard to slip under the radar.

Babbitt lit a fire under environmentalists

Campbell, who began visiting the swamp in the 1970s, has co-owned Okefenokee Adventures since 2000 with his wife Joy and is  chairman of the St. Marys Riverkeeper. The business is the wildlife refuge’s official concessionaire and provides tours of the swamp.

Campbell recalls the spring of 1997 when Babbitt witnessed the extent of DuPont’s plan while flying over the refuge.

Babbitt’s vocal opposition to the project is credited with helping kill it.

“That ‘stance’ made the issue public and generally lit the fire under the environmental community to activate,” said Andrew Schock, who worked for the National Wildlife Federation while the DuPont saga played out.

DuPont hosted monthly meetings in Folkston in an attempt to ease concerns.

“DuPont’s premise was if we can’t convince the stakeholders this is economically good for the community and not harmful to the Okefenokee Swamp, then we will not mine,” Schock said in an email.

While opposition from conservation groups could be expected, there also was pushback from a DuPont stockholder who began to wear other influential people down.

DuPont decided in 1999 to stop trying to mine near the Okefenokee.

In the end, DuPont’s failure turned into a win for the conservation of the Okefenokee area, Campbell said.

“We managed to take off the table what I considered to be the most ecologically sensitive stretch of Trail Ridge, in so far as its relation to the potential ecological impact on St. Marys River,” Campbell said.

Twin Pines’ long-term plan is to mine titanium from 12,000 acres in Charlton, a community of roughly 13,000 residents. The first phase would cover roughly 2,400 acres, according to the application.

The U.S. Army Corps of Engineers will ultimately decide if the mining permit is approved.

In addition to the two hearings next week, the public can comment through Sept. 12 with the U.S. Army Corps of Engineers Savannah district.

One of the alarming concerns for the Twin Pines’ mine is if it will cause hydrological problems with the Okefenokee Swamp with each phase, said Bill Sapp, senior attorney for the Southern Environmental Law Center. The mine will dig an average of 50 feet deep.

Campbell and Mike Worley, president and CEO of the Georgia Wildlife Federation, said Twin Pines’ mining plans don’t appear to pose the same threat to the Okefenokee as DuPont’s proposal,  however some questions need to be answered.

“I think what folks are calling for right now is to ensure we know as much as possible and to do the science we need to make sure that we are protecting this extremely valuable resource,” Worley said. 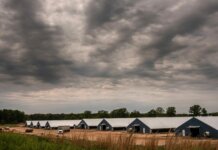 Public pressure killed Okefenokee mining plans once. Will it again?

Public gets say at south Ga. hearings next week on proposal by Twin Pines Minerals to strip mine near the wildlife refuge