A Milledgeville Republican and funeral home director is pushing for more more oversight of his own industry. Don LaVange/Creative Commons.

Rep. Rick Williams is part of a small group of Georgia lawmakers who informally call themselves the funeral home caucus and are known for their macabre quips on the House floor. As Williams has told his colleagues, he’ll be the last one to let them down.

But the middle Georgia funeral home director isn’t joking around about his profession today. 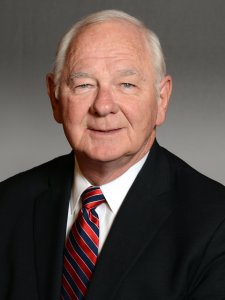 The Milledgeville Republican is leading a legislative fact-finding mission that he hopes will lead to more oversight of his own industry after a few fraud cases across the state have brought scrutiny to those touting pre-paid funeral and cemetery services and merchandise.

“We’ve just got to put a lid on it and stop it and set up measures before this gets any worse,” Williams said in a phone interview Monday. “We need to make sure that the consumer is protected.”

Most recently, a north Georgia insurance agent was charged with scamming elderly victims out of more than $75,000 that was meant to go toward funeral insurance.

Earlier this summer, a county coroner in middle Georgia who previously owned a funeral home was accused of stealing from his clients who paid into pre-need accounts.

And in another case, a man who thought he had already buried his mother got a call last summer from a crematorium that his mom’s ashes were ready to be picked up. A funeral home owner in south Georgia was charged. Three sets of other unidentified remains were found at his business.

“I don’t think we’re talking about the vast majority (of businesses), by any means,” Rep. Alan Powell, who chairs the House Regulated Industries Committee, said at a recent meeting held to discuss the issue.

“It’s probably just a miniscule part that are either lackadaisical or just lazy, quite frankly, about what they’re doing, or they may be criminal,” Powell said.

Williams said Monday the panel is still investigating and that it’s too early to discuss what specific steps lawmakers may take next year to ramp up accountability and oversight.

But he attributed the genesis of the problems to a decision made years ago to remove cemetery oversight from the Georgia Secretary of State’s Office.

Fixing the problem, he said, may require taking a fresh look at a 2000 law that created a standalone cemetery state board and tasked it with all pre-need funeral and cemetery issues, even though there is separate funeral home board.

Proponents of tighter rules within the industry say there are low-cost, fly-by-night funeral homes operating in Georgia without a license and that consumers are the ones who ultimately suffer when these facilities do not abide by industry standards or are not held accountable.

“This is not protecting the funeral homes,” said Williams, who is a licensed funeral director in Milledgeville. “This is going to penalize us. This is going to make us pay more money to jump through more hoops to do things right, but it’s got to be done. We’ve got to clean it up.”

Jill Nolin has spent nearly 15 years reporting on state and local government in four states, focusing on policy and political stories and tracking public spending. She has spent the last five years chasing stories in the halls of Georgia’s Gold Dome, earning recognition for her work showing the impact of rising opioid addiction on the state’s rural communities. She is a graduate of Troy University.