September marks not only the start of football season, but the start of the school year for many Georgians. Students from all walks of life will show up to their classrooms and lecture halls during this time. I’m one of those students, having recently started another year at Dalton State College.

The beginning of September also marks the two-year anniversary of the rescission of the Deferred Action for Childhood Arrival (DACA) program, which lets young people like me, who were brought to the United States as children, lawfully work and pursue an education in the country we call home.

Due to various court injunctions, I’m allowed to continue my education at Dalton State — but the U.S. Supreme Court is set to take up three DACA cases this November. Their ruling, expected as soon as Spring 2020, could ultimately end the program, stripping me of my DACA protections, placing me at risk of deportation, and ripping me out of the workforce and away from my college courses.

It would also result in thousands of others with DACA status being removed and a severe damage to Georgia’s economy – the removal of DACA-authorized workers in our state would result in a nearly $1 billion annual GDP loss.

Leaving DACA in the courts’ hands means that it’s at risk of vanishing for good unless Congress takes action to write the program into law. For DACA recipients across the country, there’s no doubt that this uncertainty adds extra stress and worry on top of writing papers, studying for exams and going to work.

Despite all this – the Trump administration’s rescission of protections and the uncertainty in the courts, as well as the barriers DACA recipients face in Georgia – I’m still determined to finish school.

The obstacles I’ve overcome motivate me. I was brought to the U.S. from Mexico as an infant and have lived in Georgia for nearly my entire life. My family contributes just like many others in Dalton by working in the carpet mills and factories that have bestowed upon us the title of “carpet capital of the world.” But unlike many other Georgians who also grew up in Georgia, I’ve had to pay higher out-of-state tuition rates, while overcoming the political and legal battles being fought in front of me.

There are thousands of others like me, many DACA recipients, who will show up for class to one day become Georgia’s newest entrepreneurs, nurses, doctors, teachers, pastors and engineers. We’re committed to our education because we hope to contribute as productive members of society.

In parts of Georgia like Dalton, DACA recipients are working hard to get an education in order to empower our communities and work the jobs that rural Georgia desperately needs.

While Georgia’s rural counties face a severe shortage of healthcare workers, there are DACA recipients learning to heal those in need of care.

While our towns are losing young people to Atlanta and the south’s other big cities, many DACA recipients hope to renew our commitment to our hometowns. We’re studying entrepreneurship so we can start businesses and invest back in the communities that first invested in us.

But as much as DACA recipients like myself are working hard and studying so that we can make a positive impact in our communities, we can’t do it by ourselves.

Unless Congress acts soon and passes permanent Dreamer protections, all that we’ve worked for could disappear. Without a legislative solution, Dreamers will be separated from our schools, our jobs, and the country we’ve grown up in and love.

I was encouraged to see the U.S. House of Representatives pass the American Dream and Promise Act in June, which would codify into our country’s laws a path to permanent resident status for DACA recipients and TPS holders, among others. In particular, I was proud of the fact that members of Congress from both sides of the aisle voted for the bill.

It’s now up to Senate leadership to take up this critical legislation and bring it to the floor for a vote. I hope that they take up their own bipartisan companion bill once they return from their “summer break” – the yearly August recess. And I hope that Georgia Sen. Johnny Isakson and Sen. David Perdue will support this bill.

As the new school year begins this fall, I ask that Georgians remember the uncertainty facing Georgia’s Dreamer students like me, and pay close attention to the fate of the DACA program as it heads to the Supreme Court this November.

Jaime Rangel is an immigration associate at FWD.us, an advocacy group that aims to change immigration and criminal justice system policies. 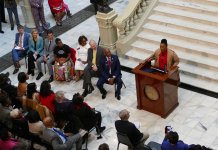