Sinking morale among state employees amid budget cuts has prompted official proclamations that job cuts should not be a go-to strategy for agency heads as they continue to look for savings.

But even so, the governor’s budget director said Friday that job losses are still “very possible” as state officials brace for a possible economic slowdown while also trying to make room for legislative priorities, such as a potential second cut to the income tax rate.

The mood of state employees is very much on the mind of some lawmakers, who had their first shot Friday at quizzing Kelly Farr, who is the director of the governor’s Office of Planning and Budget, during a joint meeting of the House and Senate appropriations committees.

Georgia’s state economist, Jeffrey Dorfman, told lawmakers Thursday that there is a fifty-fifty chance of a “mild recession” next year, likely in the beginning of the year. The state has seen rocky revenues for the first quarter of the fiscal year that have fallen short of expectations, partly due to a decision to cut the income tax rate in 2018.

His forecast helps provide insight into why Gov. Brian Kemp unexpectedly ordered a 4% budget cut for this year and 6% reduction for next year, even as the state economy appeared to be humming along just fine.

“There’s a lot of panic right now among rank-and-file workers,” Rep. Al Williams, a Midway Democrat, said to Farr. “Now, you’ve done a great job, but a person working at DFCS in Hinesville, Georgia, only knows that, ‘I may not have a job, or I might go on furlough.’

“It affects morale terrifically if a person doesn’t know what kind of job they’re going to have in January,” Williams said.

In response, Farr said his office fired off a memo to agency heads recently after hearing similar reports. The note instructed department leaders to make every effort to spare jobs and cuts to core services when looking for savings.

“The focus and the intention is that before agencies get to that point, they will have a very thorough analysis of the vacancies they have available to them, the attrition they expect for the year,” Farr said.

Most of the proposed reductions floated earlier this month were related to personnel cuts or eliminated vacant positions. State child welfare services, for example, would see nearly 100 unfilled positions trimmed from the state Department of Human Resources’ budget under the cuts, saving around $6.6 million total this year and next, according to a department document.

Those cuts would not oust anyone from their jobs, but could make it tougher to hire new child welfare employees in a program that already faces about a 35% turnover rate annually, said Walter Jones, the communications director for the department’s Division of Family and Children Services. That would hinder efforts to bring down the number of caseloads each child welfare manager handles in Georgia from 19 cases currently to the national best-practice of 15 cases.

“One of the aspects of this job is you can’t just not do it because you don’t have enough people,” Jones said. “It just means you have to work harder and possibly longer.”

Farr said this office will discuss other possible areas for savings, such as reduced travel, recurring operational expenses and improved efficiencies.

“I have no idea what the future holds, but I do feel very confident that we will do a very thorough dive into what they’re not able to do before they have to do something that impacts people or services,” Farr said.

“But it’s very possible that could happen,” he added, referring to job cuts.

Other lawmakers, such as state Sen. Freddie Powell Sims, a Dawson Democrat, said they are worried about the toll the cuts may have on rural Georgia. Southwest Georgia, in particular, has struggled to recover after Hurricane Michael devastated that corner of the state last year.

“In southwest Georgia, we’ve endured so, so much these last few years, and it’s a struggle to reinvent or to just survive,” Powell said. “And we would hope that you all would really think about how those cuts would impact southwest Georgia.”

Beau Evans contributed to this report. 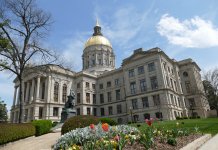