Georgia voters head to the polls today to pick local candidates, decide whether restaurants in their community can serve alcohol at 11 a.m. on Sundays and consider a variety of local tax issues.

Many voters will cast ballots in a pilot test of the state’s new $107 million voting machine system, as hundreds of the devices make their election-day debut in six Georgia counties.

Voters in three-fourths of Georgia’s 159 counties and about 400 cities will elect county and city leaders, consider approving sales taxes for school and transportation funding and embracing the state’s 2017 “Brunch Bill.” Six counties will help the Georgia Secretary of State’s office debut hundreds of the state’s new voting machines. The state aims to have roughly 30,000 devices ready to tally votes in time for the March 2020 Presidential primary election.

For most of the state’s voters, today will provide one last election with the touch-screen and memory card they’ve used before picking up an “I’m a Georgia voter” sticker on the way out of the precinct.

State officials last month started training county elections officials how to use the new ballot-scanning machines that will replace the state’s 17-year-old touchscreen devices. Voters will get the first election-day look at them in Lowndes, Catoosa, Decatur, Carroll, Bartow and Paulding counties. Meanwhile, voters in Cobb County are set to cast hand-written paper ballots to test a back-up voting system to be used if the new ballot-scanning machines are not ready for statewide use in 2020 elections.

Tuesday’s turnout is expected to be low despite the mild temperatures and dry weather forecast for most of Georgia. Contested mayoral races, and the restaurant alcohol sale measures in several cities and counties could give some areas a boost in voting, but several county elections officials said they expect about 10% turnout.

Early voters in Paulding cast roughly 1,200 ballots on the new voting machines — a small turnout in the context of its 118,000 registered voters, said Deidre Holden, supervisor of the Paulding County Board of Elections and Voter Registration. The county is running elections for seats on Dallas’ city council and for Hiram’s mayor, as well as a “Brunch Bill” referendum.

Smyrna voters are set to use handwritten paper ballots to settle a contest among five candidates running to succeed retiring Mayor Max Bacon, who served the Cobb County city for more than three decades. Five candidates are also on the ballot for Valdosta mayor, one of more than 200 mayoral contests across the state.

Sales taxes to raise money for local schools and transportation projects are up for consideration in 33 counties including Chatham, Coweta, Hall, Spalding, Richmond and Paulding.

Nearly 300 of the new voting machines will be spread across Paulding County precincts, Holden said. The low-turnout election should give poll workers and voters a taste of what they might encounter during next November’s presidential election, such as longer lines as the new scanners create an extra step in casting a ballot.

“It’s going to be a strategy to get that all worked out when we do have the bigger elections,” Holden said.

The new machines worked largely as advertised during the early voting period last month, according to a sampling of county elections officials testing the equipment.

Poll workers had to replace a scanner when a ballot got jammed in it, said Joseph Kirk, supervisor of the Bartow County Board of Elections and Voter Registration. He said he thinks the paper jam was a fluke.

About a third of Bartow’s 16 precincts will be open Tuesday, Kirk said, similar to several other counties piloting the new voting machines where precincts in unincorporated areas will be closed for the off-year election.

“I think all the pilot counties are having a different experience in terms of turnout and focusing on different things,” Kirk said. “Going into next year, I’m very confident.” 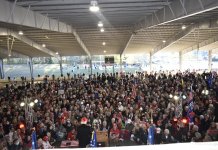 Most Ga. voters get last chance to touch screens of old ballot counters