The sweeping legislation passed largely along party lines, with 230 lawmakers voting for it and 192 against. Only two House Republicans voted for the bill — Reps. Jaime Herrera Beutler of Washington and Brian Fitzpatrick of Pennsylvania.

The cost of prescription drugs has soared in recent years, and Americans pay more for drugs than do residents of other wealthy countries.

In Georgia, the average annual cost of prescription drug treatment rose nearly 60% between 2012 and 2017, far more than the 11 percent increase in Georgians’ average annual income over the same time, according to an analysis by AARP. Nearly one-third of Georgia residents stopped taking drugs as prescribed because they couldn’t afford them.

U.S. drug prices are especially high in large part because the federal government doesn’t negotiate lower prices with drug companies, experts say — but the bill passed Thursday would enable it to do so.

Under the bill, lower prices would be available to all consumers, not just beneficiaries of Medicare, the government insurance program serving Americans over age 65 and some younger adults with certain disabilities or who have kidney failure.

The bill would also bar drug companies from charging Americans significantly more than they charge consumers in other countries for the same drugs and from raising prices at rates higher than inflation. And it would cap out-of-pocket spending on prescription drugs at $2,000 and expand Medicare coverage to include vision, hearing and dental benefits.

Savings from lower drug costs — which Democrats said would amount to $500 billion over 10 years — would also be invested in biomedical research, efforts to combat the opioid epidemic, home visitation programs for women and children, and health centers targeting underserved people.

Republicans objected to the legislation, calling it a bad deal for Americans. They argue that regulating drug prices would suppress innovation in biomedical research and stall the development of life-saving drugs and treatments.

“It’s simply a chance we cannot afford to take,” said Georgia U.S. Rep. Buddy Carter, a Pooler Republican. Carter is the only pharmacist in the House and is co-chair of the Community Pharmacy Caucus.

Democratic Rep. Mike Doyle of Pennsylvania rejected the argument, saying Wednesday that drug prices are going up not because of the cost of research and development, but because “drugmakers are jacking up prices wherever and whenever they can maximize their profits.”

Republicans also said the bill would reduce the number of drugs and treatments available on the U.S. market and force Americans to wait longer to access them.

As an alternative, they offered a smaller-scale proposal that would not “impose price controls” but would lower out-of-pocket spending and increase transparency while protecting access to new medicines and encouraging competition.

Most Americans think prescription drugs are too expensive, polls show, and one in four insured adults has difficulty paying for them. Majorities favor efforts to reduce their cost — including allowing the federal government to negotiate prices with drug companies.

The Democratic-led bill that passed the House Thursday is not expected to clear the GOP-controlled Senate, and President Donald Trump has threatened to veto it.

The White House said it would “likely undermine access to lifesaving drugs” and cited a report by the Council of Economic Advisers, an executive branch agency, that found that it could lead to the loss or significant delay in the development of as many as 100 new medicines.

But Democrats accused Trump — who pledged in 2016 to “negotiate like crazy” for lower drug prices — of backpedaling on his campaign promise. “Trump promised in 2016 he would work to lower drug prices,” House Majority Leader Steny Hoyer (D-Md.) said on the floor Thursday. “For that reason, he ought to support it. 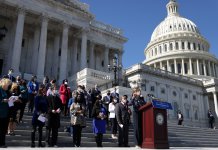