That prompted quick criticism from some criminal justice reform organizations that hoped lawmakers would recommend restoring voting rights for some people convicted of nonviolent felonies.

Some people told the committee that a person gives up their rights when they decided to commit a felony.

The committee heard a wide range of recommendations from groups, including letting all felons continue voting even while incarcerated, said Sen. Randy Robertson, chairman of the study committee.

Many more agencies and groups need to play a role in the future in deciding if the law needs to be clarified, he said. Georgia’s code says anyone convicted of a felony that’s considered a crime of “moral turpitude” must complete their sentence before being able to vote.

Every felony can now be considered a violation of moral turpitude. And no felon can vote while on parole or probation, a restriction some organizations say runs unreasonably long.

“My hope is to have a conversation with the presiding Senate pro-tem to make this a priority of the Senate and also during the voters right caucus that takes place during the session,” said Robertson, a Cataula Republican. “That would give us an opportunity not only to have a public discussion but also a bipartisan discussion.”

Some voting rights activists don’t expect any substantial modifications to voting restrictions will happen in 2020, an election year.

“If they didn’t do anything now in a study session, to think they are going to do something in a legislative session it strains all matter of reason,” said Billy Honor, director of faith organizing for the New Georgia Project.

Roberta Meyers, director of state strategy and reentry for the Legal Action Center, says organization could have helped committee members narrow down the types of offenders that should be first to get voting rights restored.

“They received considerable information about individuals convicted of marijuana felony offenses and could have taken up that issue if for nothing else,” she said following Wednesday’s meeting. “To just say, ‘oh, we’ll leave it as it is’ and not address it is unacceptable.”

Sen. Harold Jones filed the legislation that led to the creation of the study committee. He said hearing from many advocacy groups and other Georgians will help when he crafts new legislation next year.

“I have to commend all these activist groups who came to testify,” said Jones, who voted against the committee’s recommendation to take no position. “Not only did they just testify, but the information they gave us was invaluable.”

Proponents of a relaxed felon voting law point out that Georgia leads the nation in the number of felons on probation or parole.

The state Department of Community Supervision reported that earlier this year there were 166,000 felons convicted of nonviolent crimes who were still on probation or parole.

And the average probation sentence is five to seven and a half years for anyone convicted of felony property or drug offenses. 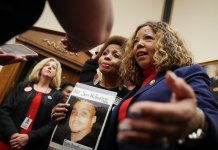