WASHINGTON — The morning after they voted to impeach President Donald Trump, a group of U.S. House Democrats gathered outside of the Agriculture Department’s headquarters to berate the administration for a policy that’s expected to knock about 700,000 people off food stamp benefits nationwide.

As about a dozen House lawmakers huddled against the cold, Rep. Marcia Fudge (D-Ohio) urged those in the crowd to “think about a person that’s hungry today” and “people who are sleeping on the streets and not knowing where their next meal is going to come from.”

The Democrats assembled outside USDA to protest a Trump administration rule that would tighten food stamp eligibility requirements by limiting states’ ability to grant waivers that extend benefits in areas with high unemployment. Georgia’s unemployment rate hit an all time low of 3.3% last month, according to an announcement yesterday by the state Department of Labor. However, in some economically struggling south Georgia counties the unemployment rate is as high as 9%.

The administration estimates that about 688,000 people nationwide will lose access to nutrition benefits under the new regulation. Here’s what it would mean for Georgia.

Combined with two other pending rules to restrict eligibility for Supplemental Nutrition Assistance Program (SNAP) benefits, the policies could lead to 3.7 million fewer people receiving food stamp benefits, according to an analysis by the Urban Institute.

“By the end of next year, more than 4 million people will lose access to food,” Fudge said. “We need to say to this administration, this president and this secretary that what they are doing is not only cruel, it is inhumane. It is immoral.”

When the rule was finalized earlier this month, Agriculture Secretary Sonny Perdue called it an effort to “move more able-bodied” food stamp recipients “towards self-sufficiency” and into employment. “We need to encourage people by giving them a helping hand but not allowing it to become an indefinitely giving hand,” said Perdue, a former Republican governor of Georgia.

Georgia Democratic Rep. Hank Johnson, who joined his colleagues at the press conference, said afterward that the administration is “hell bent on exacting pain on suffering people and it’s heartless.”

Rep. Sanford Bishop, another Georgia Democrat, called the food stamp policy “an abomination that only serves to punish our most vulnerable citizens who are working hard to support themselves and their families.”

He added, “Ebenezer Scrooge would be proud. Let’s overturn this rule.”

‘Demonization of the poor’

Adams, vice chair of the House Committee on Agriculture, said she knows “that this proposal hurts people because my state already did it.” In 2015, she added, “the North Carolina legislature passed a law preventing waivers and the law took away benefits from 100,000 of our state’s poorest adults in our most job-deprived areas.”

It’s “a bad policy,” Adams said, “and we should not make it nationwide.”

Wisconsin Democratic Rep. Gwen Moore accused the administration of using a “contorted, twisted sense of statistics to figure out how to create hunger among 700,000 additional people. … There are no data to support the fact that hungry people are more employable.”

Rep. Karen Bass (D-Calif.), chairwoman of the Congressional Black Caucus, said the rule is about the “demonization of the poor.”

She said opponents of the rule intend to fight the policy and win. “And I know very shortly, we’re going to say goodbye to the people over there in that building and send them back to where they belong,” Bass said, referring to the political appointees at USDA.

The new policy, finalized earlier this month, is set to take effect on April 1.

House Democrats have introduced legislation that aims to block the policy by cutting off funding for the implementation of the rule.

Rep. Jim McGovern (D-Mass.), chairman of the House Rules Committee, called the policy an “end run around Congress” and warned the administration it can expect legal challenges. “We are gonna see these people in court,” he said. 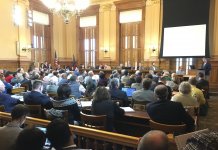 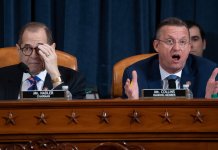