Juvenile court judges don’t object in principle to increasing the age to 18 from 17, when suspected criminals are automatically charged as an adult. Instead, they worry the juvenile system lacks resources to handle the resulting  higher caseload or services tailored to teenagers.

Judges, prosecutors, criminal justice reform advocates and state lawmakers met for a “Raise the Age” discussion at the state Capitol Friday to discuss legislation that lawmakers could pass this year. A lawmaker backing the bill says increasing the age to charge as an adult should keep more teens out of state prisons and also prevent them from having a public criminal record that follows them into adulthood.

Price said it’s imperative that the state properly invest in treatment services and other programs for youth offenders if the law is changed.

“We don’t need another unfunded mandate from the Legislature,” said Price, vice president of the Council of Juvenile Court Judges of Georgia. “Until you do it with the right services in place, you’re not doing anything to reduce recidivism if you just change the location of the court.”

State Rep. Mandi Ballinger, a Republican from Canton, said she’s still pushing to get House Bill 440 passed in the upcoming session. But her plan is for the new law not to take effect until juvenile justice officials and other experts develop the plan.

Eleven states increased the age to treat nonviolent offenders as adults in the past decade or so, most recently including North Carolina and Missouri.

Some lawmakers are raising concerns that hardened criminals who are 17 might get off with too little punishment and others connected to criminal justice systems worry about potential costs and how the transition would take place, she said. She wants to allow time to iron out those issues.

“If we’re going to get coordinated and make this happen in 2020, we need to get on the same page,” Ballinger said.

Georgia, Texas and Wisconsin are the three states where 17-year-olds must go through adult courts, according to the Washington D.C.-based Campaign for Youth Justice.

A 17-year-old that commits a serious crime like a sex offense or armed robbery would still go through the normal adult court system, according to language now in the Georgia bill.

Most of the states that pass the law take 18-months to two years before it goes into effect, said Marcy Mistrett, CEO of Campaign for Youth Justice.

“I feel like the moral argument has been won on this issue,” she said. “We know that most 17-year-olds look more like 16-year-olds than adults in terms of their arrest patterns, mostly very low-level offenses.”

A GBI report shows about 6,500 17-year-olds were charged with crimes in 2018. In November 2019, 77 17-year-old inmates and a 16-year-old inmate were incarcerated in three state prisons with adults, according to the Georgia Department of Corrections.

If those teenagers are taken out of the state’s adult prison population, the cost of processing the 18-year-olds in the juvenile system could fall heavily on local governments, said Debra Nesbit, associate legislative director for the Association County Commissioners of Georgia.

“Look at the resources and funding and follow it to make sure that if you close a youth detention center, that that money then goes over to a local court for those local services,” she said. 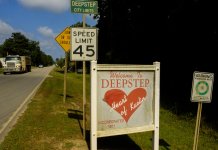