WASHINGTON — The GOP-controlled U.S. Senate heads into 2020 with few major legislative victories but a significant one on the judicial front: a dramatic reshaping of the federal bench.

Over the past three years, the Senate has confirmed 185 of President Trump’s judicial nominees, more than any of the last five presidents at the same time in their presidencies. That tally includes a raft of nominees approved just before lawmakers left Capitol Hill for the holiday recess.

Trump touted his judicial appointments — including the confirmations of two U.S. Supreme Court justices — as “the most incredible thing” at an Oval Office press conference the day after the U.S. House voted for his impeachment. “It’s unheard of,” Trump said of the appointments. “That’s said to be the most important thing that a president has.”

In addition to the two Supreme Court justices, the Senate has confirmed 50 circuit court and 133 district court judges, most of whom progressive groups have decried as far-right ideologues. Of those, the vast majority are white (85%) and male (75%).

So far, Trump’s nominees comprise about a fifth of all federal judgeships and nearly a third of circuit court judgeships.

“We are really turning back the clock decades when it comes to these nominees,” said Lena Zwarensteyn, a campaign director at the Leadership Conference on Civil and Human Rights.

Paul Gordon, legislative counsel with the liberal advocacy group People for the American Way, agreed. “It’s a movement basically to repeal the New Deal,” he said, referring to the package of progressive social reforms enacted in the 1930s.

The Senate’s frenzy around judges comes in stark contrast to its approach to legislation.

Halfway through the 116th Congress, roughly 80 bills have been signed into law, some of which relate to routine or inconsequential items, such as issuing commemorative coins and naming federal buildings. That pales in comparison to recent decades, when roughly 300-500 bills became law during the full two-year session (and between 700-800 did in the 1970s and 80s), according to data compiled by the website GovTrack.

To be sure, the Senate has cleared some significant legislation, including a government funding bill that raises the age to buy tobacco products, hikes pay for troops and federal workers, and funds gun violence research. It also passed a defense policy bill that gives federal workers paid parental leave and creates a Space Force.

Democrats regularly refer to it as a “legislative graveyard” and point out that the House has passed more than 400 bills, including at least 275 with bipartisan support, that are sitting on McConnell’s desk. These include legislation that would stiffen background checks on gun purchases, strengthen equal pay laws, reauthorize the Violence Against Women Act and more.

McConnell relishes his success in stopping bills passed by the Democratic-held House, even referring to himself as the grim reaper. “None of that stuff is gonna pass,” he has said.

But he regularly boasts of his action on Trump’s judges, tweeting recently: “In less than three years, President Trump has appointed and the Republican Senate has confirmed 50 circuit judges. That is already the most in any president’s whole first term since 1980.”

McConnell credits his progress on judges — which don’t require House approval — to a rules change he engineered that slashes debate time on district court nominees from 30 hours to two.

The rapid pace of judicial confirmations is also due to an erosion of other Senate norms.

The traditional “blue slip” process, a senatorial courtesy that in the past has enabled senators from a nominee’s home state to block advancement, has also weakened in recent years.

Last month, Lawrence VanDyke — a conservative who served in the Trump administration — was confirmed to one of Nevada’s seats on the 9th U.S. Circuit Court of Appeals despite objections from both of the state senators.

Another judge who cleared the Senate over objections from his home state senators is Steven Menashi, who now sits on the 2nd U.S. Circuit Court of Appeals in New York. New York Democratic Sens. Chuck Schumer and Kirsten Gillibrand objected to him, accusing him of working at the U.S. Education Department to undermine protections for survivors of campus sexual assault, fund schools that discriminate against LGBTQ students and weaken protections for students who were defrauded by their institutions.

Senate Democrats opposed numerous other nominees last year, such as:

Chad Readler (6th Circuit), who as a Trump administration official filed a brief in support of GOP efforts to strike down the Affordable Care Act, including its protections for people with pre-existing conditions. Parts of the law were struck down in December.

Wendy Vitter (Eastern District Court of Louisiana), who has a history of advocating against abortion rights.

Sarah Pitlyk (Eastern District of Missouri), a staunch opponent of abortion, contraception and reproductive technologies such as in-vitro fertilization and surrogacy.

“All these nominees paint a picture,” said Dan Goldberg, legal director at the Alliance for Justice. The administration doesn’t want “fair-minded jurists,” he said. “They want right-wing ideologues who will achieve their policy goals.”

He and other progressive activists are working to curb the effort through organizing, media outreach, the publication of research and reports, research tools and awareness campaigns about the effect of judges on public life.

“We have to fix the courts,” Gordon said. “And we can’t do that unless voters understand the impact that these bad judges are having on them.” 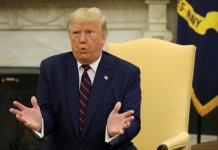