Fletcher Sams, executive director of the Altamaha Riverkeeper, slowly fills a bottle cap by cap with water from the kitchen sink of John Dupree, who is seen in the background. This was the 77th water test Sams has done near Plant Scherer in Juliette where many residents like Dupree rely on well water. Jill Nolin/Georgia Recorder

JULIETTE, Ga. —John Dupree and his family of seven switched to bottled water a few weeks ago over fears that the water flowing from their faucet could be loaded with dangerous toxins.

A recent at-home test confirmed he has reason to worry: It showed excessive levels of hexavalent chromium, which is a known carcinogen at the center of the 2000 movie Erin Brockovich.

“My biggest concerns are, you know, what damage has it done,” said the 41-year-old father of five as his children played in the backyard.

“My faith is in the Lord,” he added. “It’s hard to rely on that sometimes, but it’s the truth and it’s in his hands. I know that. But it’s still just hard to see what I could do?”

The Duprees live on Dames Ferry Road near Lake Juliette, the beloved local fishing hole that has fed water to Plant Scherer ever since the nation’s largest coal-fired power plant cranked out its first kilowatt in 1982.

On a recent unseasonably warm afternoon, Dupree opened his door to Fletcher Sams, the executive director of the Altamaha Riverkeeper who has been using grant money to test the water in dozens of homes near the massive plant. Dupree represents Sams’ 77th test, but he’s hunting for the funding needed to test as many as a thousand homes in the area.

So far, the organization says it has found coal ash contaminants, such as boron, strontium, vanadium and hexavalent chromium.

“The main thing that I’m trying to ‘prove’ is that the same things that the (Georgia Power) monitoring wells that they are disclosing their data on – showing that these heavy metals are leaking out – are the same heavy metals that we’re finding in people’s wells,” Sams said later in an interview.

“Now, proving in a court of law like, ‘Hey, this boron came from there, that cobalt came from there,’ I may not be able to do that, but these people don’t have any answers,” he said.

After collecting the water sample from the Dupree home, Sams offered some sobering advice while John Dupree endures the month-long wait for an independent lab in North Carolina to produce the test results: Go to the doctor and request bloodwork for his young children.

Juliette is a small town just north of Macon and about an hour drive from Atlanta with two main claims to fame: It was the film location for the 1991 film Fried Green Tomatoes. The Ocmulgee River, which eventually flows into the Altamaha River, can be heard faintly roaring from the porch of the famed Whistle Stop Café.

Juliette is also home to the largest coal-fired power plant in the country, although that claim doesn’t quite evoke the same feeling of awe that it once did locally. Residents question whether the unlined coal ash pond – the one that is submerged in an aquifer – has something to do with the contaminants showing up in their well water.

Wolff said later that she moved to Juliette about eight years ago when her grandchildren moved in with her. She said she deeply regrets not looking beyond the reputable school system when researching the area. Now, she said she feels stuck.

She is still waiting to hear the results of her test, but she expects bad news. She’s so sure of it that every week the petite 59-year-old grandmother lugs four five-gallon jugs of water into her home so her family will have clean water to drink and cook with. She’s been doing that for years, although using the well water for showers is unavoidable.

At this point, Wolff said she would consider an offer from Georgia Power, which has bought up dozens of properties around the plant and filled in the wells to create what the utility calls a buffer. But she would rather local officials – and the utility – pony up the money to extend water lines to the homes so she can stay put.

Advocates are also urging residents to join them in pressing state lawmakers to require the utility to move the 16 million cubic yards of toxic coal ash to a lined landfill, just as household garbage is already treated. Currently, the utility is moving toward closing the coal ash pit in place, leaving it unlined.

Wolff’s frustration drove her to join the more than 100 people who turned out this week for a community meeting led by the Altahama Riverkeeper and held at a local Baptist church.

The meeting in Juliette, at times, turned tense, but mostly fear and uncertainty filled the sanctuary, with apprehensive residents peppering Sams with questions about whether water tests had turned up contaminants on their particular street.

Jerry Tomberlin doesn’t have to wonder. A test found 2.1 parts per billion of hexavalent chromium in his water. By comparison, California where the Brockovich case played out has set its standard at 0.02 parts per billion. The riverkeeper’s tests have found as high as 10.4 in Juliette. 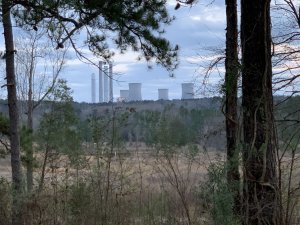 The 55-year-old who has lived in Juliette for 18 years said he wonders now whether the tainted drinking water is responsible for the cancer that killed his dog, his neighbor’s dog, his neighbor and his mother-in-law.

Like Wolff, Tomberlin said he feels trapped where he is because of the damage done to property values. He said he wishes he could start over somewhere else.

“They could swallow up this whole county because who else is going to buy it,” Tomberlin said, referring to Georgia Power.

“You get tired of brushing your teeth with bottled water every day. I can’t even water tomatoes. I can’t have a garden. I don’t even like taking a shower, to be honest.”

Georgia Power was not present and did not respond to a request for comment on the concerns aired at the meeting. The utility has maintained in the past that it is in compliance with state and federal laws and that it has not identified a risk to public health or drinking water.

The elected state Public Service Commission recently signed off Georgia Power’s request to collect $525 million from ratepayers over the next few years to cover some of its coal ash cleanup costs.

Commissioner Tim Echols has said previously that the state and federal regulations on coal ash were a driver behind those costs.

When asked what he might say to concerned Juliette residents, Echols said Thursday in a message on Twitter that the water quality around the plant is monitored by a third-party engineering firm through a series of wells.

The state Environmental Protection Division, he noted, has say over what ultimately comes of the coal ash.

“The ash pond at Plant Scherer is 500 acres and Georgia Power has secured an additional 1,000 acres of buffer land,” Echols said. “The Power Company will cap-in-place that pond per the Georgia EPD permit when issued.”

Jill Nolin has spent nearly 15 years reporting on state and local government in four states, focusing on policy and political stories and tracking public spending. She has spent the last five years chasing stories in the halls of Georgia’s Gold Dome, earning recognition for her work showing the impact of rising opioid addiction on the state’s rural communities. She is a graduate of Troy University.