WASHINGTON — U.S. Rep. Doug Collins finds it funny that his GOP critics are attacking him as a “swamp creature.”

Collins, a fourth-term Georgia Republican in the U.S. House, sparked an intra-party brawl when he announced his challenge to Sen. Kelly Loeffler, who was appointed after the retirement of former Sen. Johnny Isakson.

The National Republican Senatorial Committee — Senate Republicans’ campaign arm — has derided Collins for entering the race. NRSC executive director Kevin McLaughlin told CNN Collins is “a swamp creature that claims to be conservative,” and urged the Georgia lawmaker to drop his Senate bid.

Collins, undeterred, laughed off the attacks on Wednesday.

“I’ve always believed that elections have a purpose. You put out ideas and you do so on the basis of your experience,” Collins told the Georgia Recorder in a brief interview on Capitol Hill. As for the swamp creature snub, Collins laughed and shot back, “Are you talking about the incumbent senator? Well, she’s the incumbent senator.”

He called the NRSC’s comments “interesting,” given that he’s “been the one who has been fighting for conservative values up here and doing the things that we’ve been doing.”

Collins said the criticism was an example of the Republicans’ “incumbent protection team” doing what they normally do. He also pointed to the NRSC’s support in 2009 for then-Pennsylvania Republican Sen. Arlen Specter over his challenger, Pat Toomey. After the NRSC endorsed Specter over Toomey in March of that year, Specter switched parties in April to become a Democrat. Specter lost the Democratic primary and Toomey clinched the seat.

The NRSC is “not confident enough — it seems to me — in their own candidate that they have to try and get me out of the race and do so by threatening my vendors and threatening people who work for me and extorting them that way,” Collins said.

His campaign has accused the NRSC of threatening its vendors in an attempt to harm his Senate bid, CNN reported.

Loeffler’s office directed a request for comment to her Senate campaign; her campaign did not respond before publication time.

“What does Ms. Loeffler have to say about it? Why is she allowing it? She knows my record, she knows who I am,” Collins said.

Trump ‘staying out of it’

As the GOP infighting has intensified, President Donald Trump last week hinted at a potential compromise among the candidates.

With both Loeffler and Collins in the crowd, Trump said, “I know Kelly, you’re going to end up liking [Collins] a lot. Something’s gonna happen that’s going to be very good, I don’t know. I haven’t figured it out yet.”

Collins said Wednesday that the comments weren’t indicative of a potential compromise between the two candidates. “He’s not getting in this race,” Collins said of Trump. The president “respects the senator and her position and he knows me intimately,” from their work together, Collins added. He was one of Trump’s leading defenders throughout the House impeachment inquiry.

“I respect the fact that he’s staying out of it,” Collins said of the president.

Trump reportedly pushed for Collins to get the appointment after Isakson’s retirement, but Georgia Republican Gov. Brian Kemp instead opted to give the seat to Loeffler, an Atlanta businesswoman and political novice.

Collins is confident about his chances.

“In November, we’re going to win our side and we’ll probably go into a runoff and next January you’ll visit me over on the Senate side,” he said.

The special election for the Senate seat won’t have primaries, and all the candidates will appear on the November ballot. If no candidate receives a majority of the vote, the top two will advance to a runoff next January. The winner will serve out the remainder of Isakson’s term through 2022.

He said he wasn’t aware of any potential compromise between Loeffler and Collins.

The Georgia Democrat said he expects Trump to be involved in the race whether or not he wants to be. “I think that Doug Collins is going to lean on his closeness to the administration and he’s going to invoke Trump as the reason why he should replace Loeffler,” Johnson said.

Asked whether the GOP infighting will open the door for a Democrat to win the Georgia seat, Johnson said, “I’m praying very hard that it does happen.” 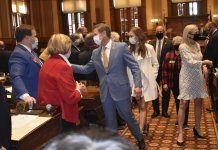 Rep. Doug Collins shrugs off GOP attacks, expects to be senator in 2021