People suffering from mental illnesses would land in the emergency room, they said. And more people contemplating suicide would act on those impulses.

Those same officials with the Department of Behavioral Health and Developmental Disabilities later softened that alarming language and so still plan to yank $10.6 million from a new program state lawmakers funded last year to provide mental health intervention services in communities across Georgia.

Those who care for or interact with fragile people in crisis say department officials got it right the first time.

“People are going to die, and that’s not an over dramatization,” said Devon Orland, a litigation director with the Georgia Advocacy Office, which provides a wide range of services to people with disabilities. “They’ll die at their own hand, they’ll die at the hands of law enforcement, or they just will die on the street. But they will die.”

This week, lawmakers are debating how to orchestrate 4% budget cuts to nearly every state agency to fulfill Gov. Brian Kemp’s order to shrink state spending. His directive is to trim about $200 million from the original budget for this fiscal year. Cutting $10.6 million for community mental health services for adults — as Department of Behavioral Health officials now propose — would amount to about 5% of the governor’s mandated reduction.

But Georgia would pay the price in other ways, mental health advocates say. Police would respond to even more calls involving someone in psychiatric crisis. Homelessness would increase, as would unpaid visits to ERs. People suffering with addictions would have fewer resources. Jails would house even more mentally ill people who really need treatment, not incarceration.

The department’s proposed cuts would primarily affect 25 Community Service Boards around the state. The boards are state-designated agencies that provide behavioral health support and treatment for people with mental illness, substance abuse disorders and developmental disabilities.

Much of the state’s increased spending on its mental health safety net began in 2010 after the U.S. Department of Justice successfully pressured Georgia to stop keeping mentally disabled people in state hospitals too long.

The Department of Behavioral Health says it will continue to fund core outpatient and crisis services at the same level as previous years. But the mental health problem in Georgia already outpaces spending on the solution. A federal monitor recently declared the state’s mental health care inadequate to address current needs. And the problem persists.

An 80-minute drive from Atlanta, Rome’s Northwest Georgia Regional Hospital is one of the psychiatric facilities that closed as a result of the DOJ’s investigation into seven institutions. As part of a settlement with the feds, Georgia officials pledged that community-based services would help the people once warehoused in such state psychiatric hospitals. Their promise: Georgia’s mentally ill would lead fuller lives with jobs and a place to call home. Advocates and local officials say that promise hasn’t been kept.

Rome City Commissioner Wendy Davis would like state budget cuts to focus on areas other than care for Georgia’s mentally ill. “There are so many unmet mental health needs in our community, and too many of those folks have ended up in our jail. And that’s distressing,” she said. “Nobody thinks that jail is the appropriate place to properly treat people with mental health needs,” she said.

Melanie Dallas, CEO of Highland Rivers Health, Rome’s Community Service Board, sympathizes with state officials trying to fulfill the governor’s mandate to cut spending. But the cuts they’re laboring over will make her work in the community harder, she said.

“It’s very difficult to have a budget cut to the department without it actually impacting services, because that’s primarily, you know, what they fund,” said Dallas, who foresees closing a small residential treatment facility in Rome as a result of the state spending reduction. “It is specifically for individuals who are coming out of the hospital, and who maybe have not lived outside of the hospital for a long time.”

Orland, whose organization helped work out the terms of Georgia’s settlement with the feds to improve mental health care, said the mental health safety net already runs lean and is too important to be targeted for additional spending cuts. “We’re not a state that is lavish in our spending to support people with psychiatric disabilities,” she said. 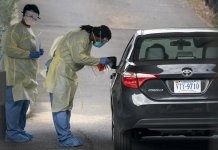 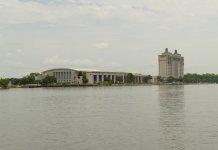 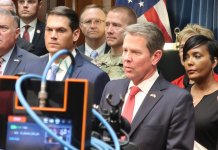 Bookman: Time for Kemp to side with sparing life over economic pain