A plan to curb some of the unexpected medical bills showing up in Georgia mailboxes narrowly cleared a key committee on Tuesday after some high-profile lawmakers suggested the measure comes up short.

The proposal seeks to target the so-called “surprise billing” issue that has dogged Georgia lawmakers for at least five years under the Gold Dome. Deep disagreement over how to fairly treat both insurers and physicians has kept out of reach a legislative solution that shields patients from unexpected costly bills.

But some lawmakers who did not support the bill questioned the omission of out-of-network facilities.

“The out-of-network billing that they might get for an emergency room visit to any hospital – not picking on any one hospital – could quadruple anything you would ever get from a doctor and would be much more likely to put somebody into bankruptcy than an out-of-network billing bill from a doctor,” said Rep. Sharon Cooper, a Marietta Republican who chairs the House Health and Human Services Committee and who didn’t vote Tuesday.

Supporters of a new attempt to address the problem said they were encouraged by Tuesday’s vote, even if House Bill 888 squeaked out of committee only because the chairman broke a tie. They argue it’s a significant step toward addressing part of a problem that can lead to financial ruin.

The bill’s sponsor, Rep. Lee Hawkins, said later that he was not troubled by the lack of enthusiasm coming from the influential House Special Committee on Access to Quality Health Care – a committee formed by House Speaker David Ralston early last year. The House Rules Committee is set to consider the legislation next.

Hawkins, a Gainesville Republican, said he understands concerns. But he counters that trying to include out-of-network facilities would drag government into contract disputes and bog down the legislative progress yet again.

His bill focuses strictly on services – both emergency and non-emergency – from an out-of-network provider at in-network facility. There is also an identical bill sitting in a Senate committee, which is set to take up the measure Wednesday afternoon.

“We’ve got too much government in health care right now,” Hawkins said. “I would rather protect the patient from the surprise bills – that’s the goal – and then we’ll deal with the other stuff at another time. One thing at a time.”

The proposal would require patients to give consent before racking up costly out-of-network services, although the patient would still have the option of choosing to pay the out-of-network cost.

Instead of sending bills to the patient, the insurer and provider would have to settle any dispute through an arbitration process.

Patient and consumer advocates, though, argue that the measure as-is would make a significant dent in the problem of surprise medical bills. About 2.6 million people could be helped, according to Georgians for a Healthy Future.

“Any further delay in passing this legislation would really only serve to keep consumers in a place where they’re receiving bills for hundreds or thousands of dollars after they’ve scheduled health care services and have done their due diligence and yet still receive bills that are out of their control,” said Laura Colbert, director of Georgians for a Healthy Future.

Colbert cited a recent study from the Journal of the American Medical Association that found that about one out of five in-network surgeries at in-network facilities result in out-of-network bills.

But even with criticism over the omission of out-of-network facilities, there are those who say the proposal goes too far.

Victor Moldovan, an attorney speaking for the Independent Doctors of Georgia, said he objected to the inclusion of non-emergency services. And he argued a provision designed to establish benchmark prices for services would “take the fangs out of the ability for doctors to negotiate their own rates.”

“The reason that doctors don’t go into network is because sometimes the rates are unacceptable,” Moldovan said. 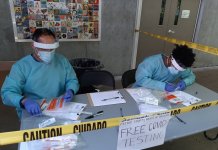