Just days before the 2018 gubernatorial election here in Georgia, Brian Kemp publicly accused the state Democratic Party of trying to hack into the state’s election system and rig the final outcome. His campaign condemned the alleged hacking attempt as “a fourth-quarter Hail Mary pass that was intercepted in the end zone” by state staff, and demanded that “these power-hungry radicals … be held accountable for their criminal behavior.”

At the time Kemp leveled that extremely grave accusation, he was running for governor, a race that he would narrowly win a few days later. He was also serving as secretary of state, and in that role was charged with overseeing a fair, unbiased election process.

He did not do so.

Instead, Kemp abused the power of his office to help him win the election. Acting as secretary of state, he announced a criminal investigation of the false allegations that he himself had made, and on the website for the state elections division, where voters go to confirm their voting sites, the following official statement was posted two days before the election:

To review: Kemp invented completely false allegations against his political opposition, based on no evidence whatsoever, and then used his office to launch official investigations into those allegations. But wait, it gets worse.

During his tenure as secretary of state, Kemp had already been responsible for a series of embarrassing technological failures, including major security breaches, that raised serious doubts about his competence as a manager. Then, just days before the 2018 election, two other serious vulnerabilities in the state’s election system had been discovered by a private citizen who was attempting to check his voter registration.

So when Kemp and his campaign learned of those new vulnerabilities, they took three steps:

On that final point, they judged correctly. Earlier this week – a full 16 months after the allegations were raised – Republican Attorney General Chris Carr finally announced what had been apparent all along:

For years now, Georgia Democrats and Republicans have been fighting over allegations of alleged voter fraud and voter suppression, with Democrats claiming that the GOP was not to be trusted in its supervision of elections. While some of the Democratic claims have proved exaggerated, many others have been proved valid in court cases.

Faith in impartial and fair elections is essential to the survival of a democracy. Kemp, who was charged with protecting that public faith, instead abused the authority of his office to give himself an unfair boost to the higher office that he now holds. If the price of his victory is less faith in election fairness, he clearly thinks it a price worth paying. 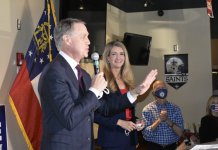