Gov. Brian Kemp declared a first-ever public health emergency in Georgia Saturday morning as the state experienced its biggest jump in confirmed cases of COVID-19 in a 24-hour period.

Sixty-four people in Georgia now have tested positive for the coronavirus. One person – a 67-year-old Cobb County man with underlying medical conditions – has died. Older adults and people with chronic health conditions are considered most vulnerable.

“This public health emergency is unprecedented for the state of Georgia and I do not take this action lightly,” Kemp said in a Saturday morning speech from the state Capitol.

Kemp’s Saturday address was itself a sign of the seriousness of the situation. Normally open to all media, the governor’s remarks were distributed to reporters and the public through Georgia Public Broadcasting.

Most of the cases have been confirmed in metro Atlanta and north Georgia, although patients have also been reported as far south as Charlton and Lowndes counties. The number of cases in Bartow, Cobb and DeKalb counties doubled over night.

Kemp said it was important to stay vigilant.

“Many of these cases have no connection to travel and the capacity of our health care system remains at the forefront of my mind as we prepare for more local transmission,” he said.

Staffing and equipment have been added to expand the state lab’s capacity to process coronavirus tests. The lab can now handle 100 specimens per day and that should double by the end of the week, Kemp said.

The state also plans to set up independent test sites in every region of the state, with the exact locations announced early next week.

The emergency declaration comes with broader powers for the governor and other state health officials. For example, it allows the state Department of Public Health to direct health care action and allows state commissions to quickly issue licenses to out-of-state health care providers.

The Georgia General Assembly – which abruptly suspended its regular session because of the crisis – will return Monday morning for a special session to ratify the directive. Lawmakers have already signed off on the governor’s request to move $100 million in emergency funding from the state’s reserves to step up efforts to combat the virus.

The virus has brought the hustle and bustle of daily life to a halt across Georgia, as schools close, employees work from home, mass gatherings are canceled or postponed and athletes compete in empty arenas, if at all. Many grocery store shelves are cleared of soap and disinfectants, as well as produce, rice and other staples.

Access to nursing homes and other facilities where people are especially vulnerable has been limited.

Handshakes, high fives and hugs have been replaced with elbow bumps or just the “air” version of these friendly greetings people exchanged without reservation just weeks ago.

And the governor urged Georgians to continue “social distancing” practices, even going as far as to encourage faith-based groups to consider canceling services.

“In the days and weeks ahead, we must remain supportive of one another, be mindful of potential exposure, use best practices to prevent infection and certainly pray for our fellow Americans,” Kemp said. “I’m asking for God’s wisdom every hour.” 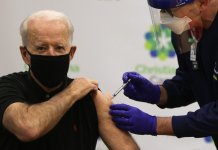 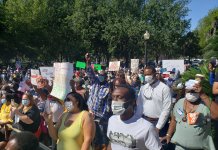 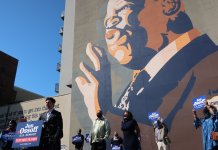