This story was updated at 9:30 a.m. Thursday to clarify the ownership of the Press-Sentinel and to include an updated comment from Jim Zachary.

The small staff at the Press-Sentinel has kept the residents of Wayne County informed of what the local hospital is doing to prepare for COVID-19’s arrival, what actions their officials have taken to limit the spread of the virus and how businesses are finding ways to improvise in tough times.

And they’ve done this while cutting their own hours – and pay – in hopes of softening the financial blow from a pandemic that has shut down much of the country’s economy since last month.

“We’re a small newspaper. We have departments of one,” said Eric Denty, publisher and sometimes sports reporter at a newspaper that delivers the news twice a week to 6,500 homes in rural Jesup. “It’s not like you can really go in and trim.”

This is the current reality for many local news outlets across the state and country: They face their own deepening financial uncertainty at a time when their communities are leaning ever more on them as the worst crisis in at least a generation erupts.

News outlets have seen a drop in their revenue after retailers – which are essential advertisers – found themselves either no longer open, unable to fully operate or unsure what items will actually be on their shelves. Advertising remains the primary source of revenue for many traditional news outlets.

Furloughs and pay cuts have been swift at newspapers both small and large, with Gannett – the parent company of the Savannah Morning News, the Augusta Chronicle and the Athens Banner-Herald – announcing cutbacks this week.

For some local journalists, the pandemic’s economic hit is personal. Several Georgia reporters just lost their jobs, picking up about a week ago at papers in mid-sized markets like the ones served by the Gwinnett Daily Post and the Brunswick News. On Tuesday, Atlanta Magazine laid off six staffers, according to editor Steve Fennessy.

“For-profit journalism is in no condition to withstand a pandemic,” Fennessy said on Twitter. “But if losing a job is as close as this virus gets to my family, when it is devastating so many, I will be fortunate.”

The pandemic is exacerbating a trend that has plagued newspapers for decades, says Keith Herndon, a professor at the University of Georgia’s Grady School of Journalism and Mass Communication.

McClatchy, which owns the Macon Telegraph and the Columbus Ledger-Enquirer, announced before COVID-19 reached pandemic status that it was going into bankruptcy. GateHouse Media and Gannett also recently merged, creating a combination that is expected to lead to more layoffs.

“While we were, in a good time, talking about the increasing amount of news deserts and all of this that’s happening in parts of the country, this circumstance that we find ourselves in now is just accelerating that issue,” Herndon said.

There were 28 rural counties in Georgia that did not have a local newspaper as of last year, according to a report from the University of North Carolina Hussman School of Journalism and Media. There was a 21% decline in newspapers in the state from 2004 to 2019.

It remains to be seen how local newspapers might evolve if they survive – or what may take their place.

Zachary noted that retail advertising was shrinking long before the pandemic. The unfolding crisis could, however, force reluctant-to-change newspapers to shift their business model.

And he thinks the future lies in content-based revenue, meaning readers pulling out their wallet to support their newspaper’s bottom line. He said his south Georgia papers have seen a modest uptick in new subscribers since the outbreak reached Georgia.

“If communities really value the newspaper, then I think they’ll find ways to keep the newspaper alive,” Zachary said. “And newspapers should be full-throated and say exactly what we’re going through.”

Zachary said his company hopes not to make deep cuts to its newsrooms and said one of its newsrooms even recently made a decision to end longstanding furloughs.

Despite the grim news in other newsrooms, the story of how the pandemic may reshape the news business remains to be written. Dink NeSmith, president of Community Newspapers Inc. and co-owner of the Press-Sentinel, said he is taking the crisis in “30-day bites.”

Some newspapers have seen some restaurants take out advertisements to promote carry-out menus while their dining rooms are closed. Some businesses, like a local bank in Jesup, have bought ads in hopes of lifting the community’s beleaguered spirits.

And many newspapers have pulled their COVID-19 coverage out from behind paywalls, making it freely available.

While this all plays out, NeSmith said he takes comfort in pondering the major events his newspapers have survived in more than a century of existence: wars, the Great Depression, the Great Recession, the dot.com bust and various other crises.

“One of the newspaper’s jobs obviously is to dispense information, but another thing that’s very important that we dispense is hope,” he said. “We’ve got to encourage our communities to keep their faith, keep their courage, keep their compassion, be cooperative and be determined because we will get to the other side.” 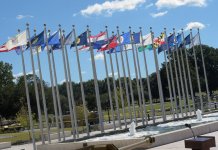 Local news ailing as it informs communities of coronavirus threat