Camden County Schools closed March 17, but it wasn’t until April 1 that substitute teacher Bern Johnson’s third-grade granddaughter got her hands on a laptop to do her schoolwork.

Johnson said some families in the southeast Georgia school district aren’t able to pick up laptops, work packets or school lunches because they don’t have transportation. Others don’t know they are available.

“How do the parents know that they can get their children Chromebooks? How are they getting in touch with these families? I know that it’s only so much the school can do, and some of the responsibilities are for the parents. I just think more can and should be done to get this information out,” she said.

In some of Georgia’s public schools, nearly every student has a laptop. In northwest Georgia, Dalton Public Schools has equipped all third-graders and older students with a laptop since 2016, according to the school board’s website.

“That is why I feel so lucky to be part of the DPS system,” said Dalton mom Season Chapman. “They issue them in grade school. My son has been coming home with a laptop every day since second or third grade.”

Chapman, her husband, and their son, now in sixth grade, are all working from home over their high-speed internet connection.

Chapman said her boy has missed hanging out with his buddies and practicing with his golf team, but being able to talk with his friends online has made social distancing more tolerable.

“Never in a million years would I have thought I would be appreciative of Fortnite, but he and his friends are staying connected” with the online video game, Chapman said.

A phone or a tablet might be the only internet-accessible device for many low-income Georgia families. Even families that are not struggling financially might share just one computer. When suddenly every family member needs it for work or school, that can be a big challenge, said Georgia State University early childhood and elementary education professor Gary Bingham.

“If you’re using your work computer to help your child complete their homework, it’s just really hard,” he said. “Everyone needs technology, it’s just hard to find time to share, and then there’s still an expectation for parents to be working while homeschooling their children. It’s just kind of exceptional.”

Gov. Brian Kemp announced last week that Georgia’s public schools will be closed through the school year, but Georgia students have been studying from home for weeks as schools shut their doors in mid-March to reduce the spread of COVID-19.

That’s been a challenge, especially for families like Johnson’s without enough devices to go around, as well as those without reliable internet access, said Georgia Budget and Policy Institute senior policy analyst Stephen Owens.

Even densely populated regions have areas with no high-speed access, Owen said.

“My parents live in north Fayette County. That’s not rural Georgia, but because they live on a street with just three houses and several acres, there’s no high-speed internet available to them. So you can see the divide by the haves and have nots, but also sometimes you might just be living in an area where it doesn’t make any financial sense for (a provider) to offer high-speed internet.”

As school systems across Georgia shut down, administrators contacted families with offers of loaner laptops and tablets to complete digital assignments. The Georgia Department of Community Affairs provides a list of free public WiFi hotspots across the state on its website. Most are in the parking lots of public spaces such as libraries, which are temporarily closed during the coronavirus outbreak.

If you do go there, you are asked to bring your own devices and maintain social distance by staying in your car while you work. Owens said that may not work for many Georgia students, who might not have access to either devices or transportation.

“We’ve heard stories of Internet Service Providers partnering with school districts and creating hotspots, but with the requirement for social distancing, you need to, like, remain in your cars,” he said. “And, just opining here, the idea of doing homework for more than 10 minutes sitting in a car when it got to 80 degrees last week sounds absolutely miserable.”

But it’s not clear how many people are now connected by these efforts, and the parts of the state that remain offline are likely to be the most vulnerable to looming state budget cuts. 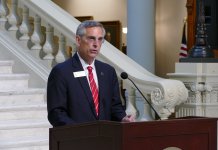 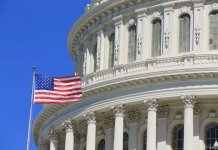 ‘People of color want freedom … from infection, freedom from death’