Georgians will stay under a shelter-in-place order through the rest of April now that Gov. Brian Kemp extended the order Wednesday as the number of COVID-19 cases in Georgia continues to rise.

The governor announced the extension Wednesday as the number of novel coronavirus cases surpassed 10,000, which has doubled in the last week. Nearly 370 people have now died in Georgia after catching the fast-spreading virus.

Kemp also extended the public health emergency for another month. Lawmakers, who were set to return to the Gold Dome next week, will not be asked to return for another special session to debate whether to continue to give the governor broader powers to combat the spread of COVID-19.

That emergency declaration – which empowered the governor to issue the shelter-in-place order last week – is now set to expire on May 13.

The governor’s order was designed to keep most Georgians at home unless they need to venture out for basic needs, such as medical care or food. But his edict, which overruled a patchwork of local measures, has been criticized for reopening beaches during spring break season and leaving state parks open. A group of north Georgia officials argued that state parks were attracting an influx of visitors and straining their resources.

Kemp attempted to address those concerns Wednesday by nixing short-term vacation rental arrangements that aren’t already fully paid. Georgians who do hit up the beaches must still practice social distancing and they can’t take umbrellas, chairs and tents along with them.

“It doesn’t mean we’re opening the beach up for spring break parties or the Friday afternoon before the July 4th weekend,” Kemp told reporters Wednesday. “If something gets out of control and Georgians are not following the directives and social distancing, then we’ll shut those down in the future, but right now people are behaving.”

Kemp said St. Simons Island had about 300 people on a recent day. And he compared the effects of his stay-at-home order to a water balloon, saying that those who were displaced from the now-closed gyms and fitness centers are going to go somewhere to exercise.

The extended emergency declaration resurrected the question of whether the May 19 primary election should be delayed. Several Republican officials have pushed for the election to be pushed back till at least June in hopes the polling places would by then be safer for voters. The state Democratic Party opposes a delay.

House Speaker David Ralston, who has been a vocal proponent of delaying the election, made his case to Secretary of State Brad Raffensperger once again Wednesday. Ralston wrote in a letter to Raffensperger that the extended declaration makes a delay “now appropriate and even more urgent.”

“We have seen many reports recently about how impactful a May 19 primary will be on the ability of poll workers to report,” Ralston wrote. “Paramount is the health of voters, poll workers and others who must be at polling precincts on Election Day.”

Raffensperger has previously said that he lacked the authority to postpone the primary, when voters will pick their candidates for county commissions, the statehouse, the U.S. Senate and other races. The extended emergency declaration now spills over into early voting, which starts in late April.

Instead of changing the election date, Raffensperger has so far opted to encourage voters to vote by mail as a safer alternative in-person voting. He has mailed all 6.9 million active voters an absentee ballot application.

For his part, Kemp said Wednesday that he’s staying out of that debate.

“That’s really a decision that he’s going to have to make,” said Kemp, who was previously the Secretary of State. “I know we’ve got a lot of hard-working local elected officials and poll workers across our state right now that are certainly concerned with holding an election. But I know that’s something he’s closer to than I am.” 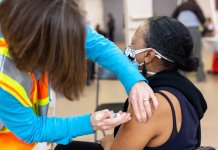 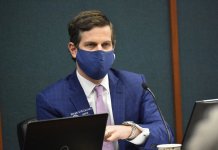