Adriana Gutierrez will open Tattoo Fiesta’s doors today for the first time in a month following Gov. Brian Kemp’s edict that businesses could begin to reopen even as the state continues to fight off a virus that has spread to more than 22,000 Georgians.

Gutierrez announced her decision to dust off their needles on social media within hours of the governor’s Monday press conference, waiting just long enough to poll her out-of-work employees on their wishes.

She said she knows there are people who think it is too soon and too risky for her tattoo parlor – and the bowling alleys, gyms, restaurants, the hair and nail salons and other close-contact services – to reopen their doors to the public.

“Some people haven’t felt the impact of this because some way or somehow, they are still working and getting paid,” said Gutierrez, who has studios in Duluth and Atlanta.

“But many people aren’t getting any money at all,” she said. “It’s hard to think for somebody else when you don’t know how it feels not to have money in your bank account to pay for your family’s food.”

But these economic pains are competing with growing fears that Georgia officials are prematurely scaling back measures meant to slow the spread of COVID-19, which has killed nearly 900 people in Georgia.

That tension only increased this week when President Donald Trump said Wednesday he disagreed “strongly” with Kemp’s decision, saying it was “too soon” and that Georgia had not met the White House criteria to start easing restrictions. Trump criticized Kemp again Thursday. Georgia Democrats have called on the Republican governor to rescind the order.

Kemp says he plans to stay the course, though, with what he calls a “measured” approach that allows parts of the state’s economy to go back to work in a limited way.

Starting Friday, tattoo parlors and other service businesses can begin to reopen, and restaurants can reopen their dining halls starting Monday. Some of the barbershops that opened Friday, such as Peachtree Battle Barber Shop in Buckhead, attracted lines Friday morning.

The caveat is that the businesses must follow social distancing and take other precautions, like checking an employee’s temperature at the beginning of a shift.

The governor released more detailed instructions for restaurants late Thursday that include 39 specific guidelines, like requiring face coverings for staff, spacing out seating to allow six feet of separation, and discontinuing salad bars and buffets.

But public health officials, mayors and others have questioned how employees and customers can effectively socially distance during services that are carried out in close quarters.

Gutierrez, for one, said COVID-19 has already changed her policies. Customers getting inked can no longer bring along a guest. The customer – and not just the artist – must wear a mask. And customers are required to have an appointment, with questions handled over the phone or through email.

But for many other of these business owners, the opportunity to begin to reopen is one they will take a pass on. Count Cynthia Walker in Albany among them.

Walker owns the Grille House in hard-hit Dougherty County, which has had the most deaths from the novel coronavirus of any county in Georgia. She said she was disappointed when the governor moved to start reopening businesses before Georgia saw two weeks of declining cases – as the White House guidelines dictate. Local officials cannot adopt restrictions that are any stricter than Kemp’s order.

As much as it pains Walker to see her spacious 7,000 square foot venue empty, she said reopening is not worth the risk. She has installed a window so she can continue serving customers her wings and ribs in the meantime, which at least brings in some income.

“We will stay closed for quite some while now – till we see a difference,” Walker said, referring to the number of cases. “Maybe another month, at least.”

State Rep. Kasey Carpenter, a Dalton Republican, says he plans to open the dining rooms at his Dalton restaurants Monday. He was still awaiting specific state guidelines, but he already planned to space out his tables, require his employees to wear masks and limit six people to a table.

Carpenter said he does not expect a surge of customers early on. He said he believes it will take time for people to feel comfortable returning to the public spaces they frequented with ease before the outbreak, which is why he thinks it’s good to start peeling back restrictions now.

“That’s why I think it’s important that the governor opened it up when he did because this is going to take time,” he said. “We’re not just going to turn the light switch on and go back to where it was in early March or February.”

Mikki Wills in downtown Valdosta – where many business owners appear to be taking a cautious approach to reopening – isn’t even sure she wants to go back to the way things were just a month ago.

If anything, she may set up some tables on her sidewalk outside next week, acknowledging that there are people in the community who think it’s too soon to bring back indoor dining.

The owner of Jessie’s Restaurant and Catering said she had to improvise during the shutdown to survive, which lead to themed take-home kits that have proven a hit. Now, she’s collaborating with other local business – like an ice cream shop and florist – to spread the love.

Wills said she was surprised Kemp started to peel back restrictions at this point. 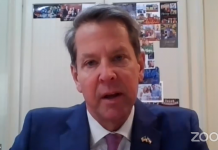