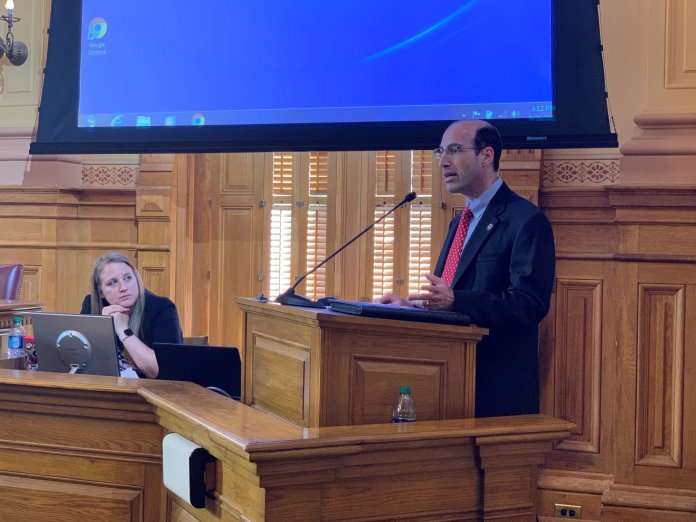 State lawmakers rushed to pass a bill earlier this year that taxes all online purchases in hopes of staving off some of the worst budget cuts discussed just months ago.

But state economist Jeffrey Dorfman quickly dashed any hopes among lawmakers that this new revenue might offset the losses caused by the Coronavirus Recession – the early signs of which are starting to be felt in Georgia.

Even with a jump in online sales from public space-wary Georgians, the change is only expected to bring in an additional $15 million per month. Last month’s sales tax collections, which reflect March consumer spending, were down $82.4 million. The tax measure, which requires third-party vendors like Etsy.com and Uber to collect and remit a tax, took effect April 1.

All told, state revenues were down about $1 billion last month – about a 35.9% drop.

“It’s a lot better to have an extra $15 million a month than not, but that is not going to save you from the hard choices you and your fellow legislators are going to have to make. Sorry,” Dorfman said Thursday.

State budget chairs asked state agencies to cut 14% from their new spending plan, which starts July 1. Lawmakers met virtually Thursday to begin early discussions on these budget negotiations. Agency heads were told to submit their proposed cuts later this month as state officials are gearing up for deep reductions – including to K-12 schools – that have been compared to those made during the Great Recession.

“I know we’ll get through it. It’s not going to be pretty or pleasant, but we’ll get there,” Rep. Terry England, an Auburn Republican who chairs the House Appropriations Committee, said Thursday.

As for how long it will take for the economy to return to normal, Dorfman told lawmakers that will rely on Georgia consumers and when they think it is safe to venture back out with their wallets again. Most of a statewide shelter-in-place order has been lifted and most businesses have been allowed to reopen their doors with restrictions, but Dorfman pointed to surveys that show sagging consumer confidence.

“It’s all going to depend on consumers and when we feel safe taking a vacation, going to a restaurant, going into a shop just for the fun of it – things like that,” Dorfman said.

“I am hoping that when we turn the economy back on as we reopen and when we get a treatment or a vaccine that things will bounce back quickly,” he said.

Just one month ago, collections were reported to be up 9.8%.

Dorfman said the only comparable historical event is the Spanish Flu in 1918, but a lack of economic data provides few clues for what to expect now.

“So, we don’t really have a good idea based on history of how this is going to go,” he said. “And so I’m learning right along with you.”

Nearly all of the state’s tax streams were down last month, including the budget’s two primary funding sources – income tax and sales tax. The usual April filing deadline for income taxes was delayed to July 15.

Two “sin tax” categories, though, were noticeably up: Alcohol and tobacco tax revenues.

“People are living it up at home and I’m glad they are,” said Kelly Farr, the governor’s budget director.

Biden calls for paid time off for vaccinations as U.S. hits 200M goal