The painful prospect of cutting billions from next year’s state budget has reignited interest in a proposal that has historically faced stiff resistance at the state Capitol: A cigarette tax hike.

State lawmakers abruptly left Atlanta in mid-March due to the COVID-19 outbreak without finishing next year’s budget, and they have just begun talks on how to slash 14% in spending to account for a revenue shortfall brought on by the economic shutdown.

That has some legislators eying an increase that would bring the state’s cigarette tax – now among the lowest in the nation – up to at least the Southeastern state average. That would add about a quarter or so to the state’s existing 37-cent excise tax.

“There’s a pretty good appetite out there among some folks to look at actually raising that, at least getting it to the Southeastern state average anyway,” Rep. Terry England, an Auburn Republican who chairs the House Appropriations Committee, said Tuesday on GPB’s Political Rewind radio show.

Such proposed tobacco tax increases have historically faced opposition from key state leaders, and lawmakers have struggled to pass any tax on vaping. A bill that would have taxed vaping products failed dramatically on the House floor during the now-suspended 2020 session over concerns it missed the mark, and other conservative lawmakers were wary of taxing the products at all. That bill remains alive due a procedural maneuver.

But when lawmakers reconvene, likely next month, they will face the grim task of cutting about $3.5 billion from the 2021 state budget that takes effect July 1. That daunting work has sparked discussions over ways to soften the the budget pain that is likely to be felt from public schools to state services the public takes for granted.

“I would guarantee there’s going to be some conversations about it,” Rep. Ron Stephens, a Savannah Republican who has repeatedly pushed for a higher tobacco tax, said Tuesday.

Stephens, who chairs the House Economic Development and Tourism Committee, said the budget plight has everything to do with the fresh energy behind a potential tobacco hike.

“There’s no question,” Stephens said. “Whenever we’re potentially going to be cutting rape kits, we’re going to be furloughing teachers, whenever our alternatives are to turn prisoners out and right on down the list to colleges and universities.”

But that said, Stephens said he doesn’t think there’s any interest in out-pacing Georgia’s neighboring states over concerns it might encourage illegal sales of tobacco products. There are early signs of consensus for charging about 67 cents per pack, which he said is enough to cover about one-third of the state’s costs for treating tobacco-related illnesses.

Neighboring states charge a range of rates, from 45 cents per pack in North Carolina to $1.34 per pack in Florida. Nationally, only Missouri at 17 cents and Virginia at 30 cents have lower tax rates than Georgia.

But advocates are pushing lawmakers to go further to try to raise hundreds of millions of dollars by lifting Georgia’s rate to the national average, which is currently $1.81 per pack. Groups like the Georgia Academy of Family Physicians say lawmakers should reach for the national average and finish sticking a tax on vaping cartridges while they are at it.

“As front-line clinicians fighting to keep our Georgia communities safe from this pandemic, a decrease in tobacco use and vaping will help those infected with coronavirus recover more quickly,” Dr. Jeff Stone, the academy’s president and a family physician in Canton, said in a statement Tuesday.

“We urge the governor and Georgia’s General Assembly to increase the cost of these deadly products. The silver lining of a state fiscal cliff would be increased revenue and healthier Georgians,” Stone said.

Andy Freeman, director of government relations in Georgia for the American Cancer Society Cancer Action Network, said a regional-focused increase would only mean about a quarter increase – something tobacco companies would easily offset by sending coupons to users.

Freeman said that is not steep enough to steer teens from trying it out or to nudge smokers toward giving up the habit, and it also won’t help lawmakers navigate their way out of a budget bind.

“We’re talking three, four billion dollars (in cuts),” Freeman said. “I don’t have the answer on how to save all of that, but $50 million is not going to do anything to offset those cuts. 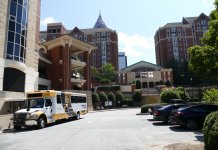