A five-way primary contest to represent a north Atlanta state House district is fueled by nearly a quarter of million dollars as two veteran politicians face off against newcomers for the chance to replace a longtime lawmaker who is stepping aside.

Many races on Georgia primary election ballots Tuesday are uncontested, to be decided in November when members of both political parties can face off.

But in contested territory where one party dominates, like the one to replace outgoing Democratic state Rep. Pat Gardner, the primary battle is for keeps. And that means the fundraising stakes are high.

And campaign spending and styles are a lot different this season when people are just gradually emerging from the spring’s stay-home restrictions imposed to contain the spread of COVID-19.

Sommelier Kyle Lamont raised more than $20,000 in that period, and homemaker Jenne Shepherd raised $4,252. Orianna Sanders is on the ballot but has yet to file a campaign disclosure.

“Candidates who can raise enough money to be operational are candidates to pay attention to,” said Emory University associate director of political science Andra Gillespie. “So the fact that Stacey Evans and Alex Wan have raised tens of thousands of dollars suggests that they are candidates who are being taken seriously by folks in the community.”

Evans and Wan said they are changing their campaign strategies to deal with new rules of social distancing, moving much of their campaign work to online platforms like Zoom and Facebook Live, which can be poor substitutes to meeting one-on-one with constituents.

“Face-to-face with the voters is the best way to communicate and share messages, just like in regular life,” Evans said. “If you’ve got something really important to talk about, you usually have the in-person meeting, so it’s hard to undervalue that, but we’ve all been doing our best to adjust.”

Wan said in-person town hall meetings allow for easier and more authentic conversations than reading a question off a screen and answering it on a tablet.

“I think you can have more open and genuine conversations about issues,” he said. “There’s more of an organic conversation or dialogue that that will occur, and you also get, in some of the group settings, this natural progression of ideas and topics as everyone interacts with each other. It’s not just the candidate and one person, it’s the candidate and a whole room of people.”

A benefit of online town halls is voters who didn’t catch them live may find them later when they are considering who to vote for, Wan said.

“The one positive thing about the virtual is that the videos of them get to live on forever on the internet, while an in-person meet and greet is for whoever’s in the room,” he said.

What’s more, you don’t have to drive to an online meeting, which means candidates can schedule them back-to-back and get more done, Evans said.

“You can do more meetings in one night,” she said. “You don’t have to travel, just switch from one Zoom meeting to the other, so that’s been one positive.”

But in addition to allowing candidates to make their cases, in-person door-to-door campaigning also serves to remind voters that an election is coming up, said Mark Rountree, president of Landmark Communications, a political consulting group.

“The reason that helps us is not so much a persuasive thing, but it’s a turnout thing,” Rountree said. “If somebody comes to your door the final weekend of the campaign, turnout goes up in that area by about 18%, from the numbers that I’ve seen.”

Without the ability to hit the streets, candidates will have to use the internet, mail and phone to get their supporters to vote.

Wan and Evans said those were already a part of their campaign strategy, but they’ve had to rearrange their spending plans to include more online spending.

Not that all of the old-school campaign tactics are giving way to virtual realities. Evans paid $43,000 to Florida-based Mad Dog Mail and over $1,700 in postage during the last disclosure period, about a quarter of her $190,000 total spending. Wan spent over $25,000 on campaign direct mail out of $80,000 in expenses.

Sending out slick mailers can be an effective means of reaching potential voters, especially older residents who are typically more likely to vote, Rountree said.

In a contest without a lot of daylight between the candidates’ platforms, the candidates are struggling to stand out from the crowd without the chance to shake voters’ hands and look them in the eye. Wan speaks of his support for public education and Evans points to her legislative experience.

And Election Day will also look a lot different to voters who line up to cast ballots in person.

Hundreds of thousands of Georgians sent in cast absentee ballots so far, and those who vote in person are supposed to line up six feet apart before they get a turn at the state’s new paper ballot marking voting machines.

When early voting started in Fulton County May 18, some precincts struggled to keep up with the new sanitizing needs to keep poll workers and voters safe, while voting traffic was light at the north Atlanta precinct where voters could find Evans, Wan and the others on their ballot. 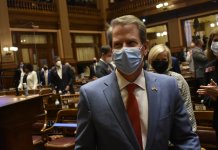 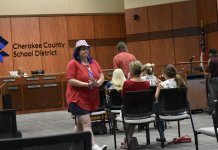 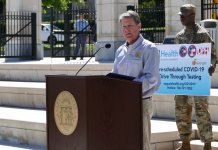