Eric Hill and his grandson Terrence Davis sat outside the Georgia capitol Monday morning with thousands of others as the state NAACP marched to protest police brutality and voter suppression.

The two held matching signs reading “I AM A MAN,” a distant echo of those carried in the 1968 Memphis Sanitation Workers Strike.

It was Davis’ first protest, but Hill has been marching since the 1960s.

“This is kind of like the second time around for me. I’m 67 years old, and it’s important for him,” Hill said, nodding toward his grandson. “He needs to understand the importance of this moment. This is an important moment in history, and I wanted to be able to bring him out and experience this with him.”

Thousands of protesters marched from the Richard B. Russell Building to the steps of the state Capitol Monday morning, as Georgia lawmakers returned to restart the 2020 legislative session. The demonstrators called for new laws aimed at clamping down on police brutality and ending Georgia’s citizen’s arrest law. A group of protesters linked arms in a circle under the Capitol rotunda to call for legislators to pass a hate crimes law and end Georgia’s Civil War-era citizen’s arrest statute.

Across Washington Street from the Capitol, retired electrician Kevin Jackson leaned against a fence as he listened to the crowd chant “black lives matter.”

Jackson was 9 and living in Toledo, Ohio when demonstrators came through his city in the wake of Martin Luther King Jr.’s assassination in Memphis on April 4, 1968.

Young people led the way back then too, Hill said.

“The first time around, some of the things that we were in the streets for came to pass, it’s kind of like some of the doors opened, but all the doors didn’t open,” Hill said. “All the doors have never opened, so this is a time where I feel like the young people are waking up, and they understand, the doors are not completely open.”

The demonstrations follow weeks of protests after the recent killings of African Americans: Rayshard Brooks in Atlanta and Ahmaud Arbery in Brunswick, as well as George Floyd in Minneapolis and Breonna Taylor in Louisville. They want hate crime legislation in Georgia, as well as voting reforms after a primary election marred by hours-long waits.

“When we were marching in the streets for Ahmaud Arbery and George Floyd, they told us to go out and vote,” said Georgia NAACP President James Woodall. “We showed up to vote Tuesday, we saw what the hell happened. So what we have to do right now is to march down to that state Capitol and let them know to do their jobs.”

At 25, Woodall was the youngest state president in NAACP history when he was sworn in last year. Other young organizers carried signs at the rally or handed out water to thirsty marchers.

One young activist was Toni Archie, a 21-year-old Gwinnett artist who painted a giant banner bearing the likeness of Martin Luther King Jr. that provided a backdrop during remarks by Woodall and other speakers including Atlanta rapper Jeezy and Atlanta Hawks head coach Lloyd Pierce.

Calls for change resonate with the younger generation because they often graduate saddled with debt and have worse earning prospects than their parents did, Archie said.

“Personally, my parents taught me to go to school, they had the resources to send me to school, and it still doesn’t feel like it’s going to be enough to get me where I need to be,” she said. “And I think a lot of my friends feel the same way, not even regarding just the racial injustice, but the economic downturn that America has taken.”

Archie’s banner of King was painted on thrift store bed sheets and held up by bamboo from an Atlanta park. She said she came up with the concept because none of the 2020 presidential candidates impressed her and she wished she could vote for someone like Atlanta’s civil rights icon.

“We’re the most frustrated (generation),” Archie said. “My mom is stable, I know a lot of older people stable in their jobs. We’re not stable. We don’t even know how to get stable right now. I don’t know how to get stable in our economic lifestyle. It’s just a lot of fear and anger because we listened to what our parents told us to do, and it still sounds like it’s not going to work.”

“Being white and having majority white friends, it’s kind of cool to see how they’ve changed their outlook on things,” he said. “They’ve gone from just a gung-ho Republican thing, from ‘this is what my daddy does,’ to ‘well, maybe I should have my own opinions on what’s going in the world.’”

As the protestors rallied outside, Republican House Speaker David Ralston called on the Senate to act on a hate crime bill approved by the House last year. Protestors’ chants could be heard inside the House chamber as Ralston spoke.

The protestors left the Gold Dome by the afternoon, but NAACP President Woodall promised they would be back if their demands for legislative relief and policy change are not met.

“Marching is only one part of the movement,” he said. “Marching and protests are not a movement in and of itself. So once we leave here today, we are going to take over that Capitol every single day until they do their jobs. And if they don’t pass those bills, we’re going to fill up the jail cells, because we’re going to shut it down.” 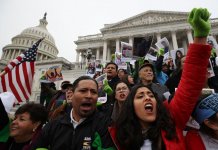 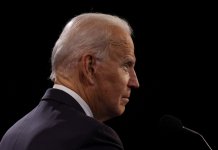