The executive order is designed to strengthen efforts to track police misconduct and uses federal funds to encourage police departments to improve training and certification standards and to work with social workers and other “co-responders” when responding to calls involving homelessness, mental illness and substance abuse.

The president’s closed-door meeting with Arbery’s mother and others with similar stories to tell was sometimes contentious, according to attorney Lee Merritt, who helped speak for the Arbery family in some Washington interviews. Arbery’s mother said she thought she got her point across.

“I’m hoping that he gathered that Ahmaud was loved,” said his mother Wanda Cooper-Jones in a late Tuesday CNN interview. “And not only Ahmaud was loved, but all the lost young men that we’ve lost due to this cycle of tragic events, they were loved as well. And those other sons, they had caring mothers just like myself.”

The February shooting of the 25-year-old Black jogger in the Satilla Shores neighborhood near Brunswick generated national outrage when a video of it went viral in April. It is one of several recent violent deaths of African Americans now galvanizing protests in Georgia and across the country.

Cooper-Jones said Trump’s executive order wouldn’t have made much difference for her son if it had been in place before his shooting death or during the mishandled investigation into it.

“I really didn’t have high expectations about the meeting,” Cooper-Jones said. “I wanted to learn more about his executive order. He explained it. After he explained it, I don’t think it would have made a difference in our son’s case.”

Under Trump’s order, the U.S. attorney general will require police credentialing agencies to confirm that departments bar chokeholds except when use of deadly force is permitted by law.

“Today is about pursuing common sense,” Trump said at a signing ceremony in the White House Rose Garden attended by a contingent of law enforcement. “We have to find common ground.”

During his remarks, Trump delivered a strong defense of the nation’s “brave men and women in blue” but said he is committed to working with Congress to enact additional police reforms.

The federal order might not affect officers’ behavior as police departments generally fall under the purview of state and local governments. Other police reform legislation is also in the works on a separate track in Congress.

The legislation would also make it easier to hold police accountable for misconduct, ban chokeholds and no-knock warrants at the federal level, limit the transfer of military-grade equipment to state and local law enforcement officials and more.

The U.S. House Judiciary Committee plans to mark up the bill Wednesday, and the House is expected to approve it this month.

Senate Republicans are expected to file their own version of police reform legislation this week.

The effort is led by Sen. Tim Scott, a Black Republican from South Carolina.

Scott has called for more body cameras and police training in de-escalation tactics, data collection on use-of-force incidents and officer-involved shootings and the creation of a committee to study the issue. He has also expressed support for a ban on chokeholds.

Senate Republicans don’t expect their bill to advance until late July at the earliest, according to Politico.

Senate Minority Leader Chuck Schumer (D-N.Y). called on Republicans to take a more comprehensive and inclusive approach to the issue and act before the July 4th recess.

“This has been a pervasive and deep problem in America for decades and centuries,” he said on the Senate floor Monday. “To now give it short shrift — to try and get off the hook — would be so wrong at the moment when Americans are calling for it.”

Merritt, the Arbery representative, said the meeting with the president was sometimes tense but potentially helpful.

“There was a contentious point of the meeting where Mr. Trump said what he’s said before, that Ahmaud Arbery looked like a good kid,” Merritt said. “And Wanda took the time to say, ‘You know what? That’s because he was a good person. And even if he weren’t a good person he would still be entitled to justice.’ It was a sobering moment for the White House to say you’re dealing with someone who cares about this issue and just empty words aren’t going to do it.” 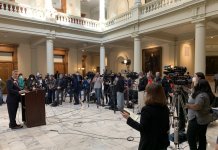