As protests continue across Georgia and the country over the deaths of African Americans at the hands of law enforcement officers, state lawmakers are proposing new limits on police powers and arrest tactics.

In the two days since the Legislature resumed its 2020 session, Democratic lawmakers filed more than half a dozen bills aimed at reducing violent police confrontations. They range in scope from banning no-knock warrants and military equipment for police agencies to mandating body cameras and de-escalation training for officers.

Much of the proposed legislation is aimed at reigning in policing tactics used in deadly confrontations with African Americans whose names and images are seen on signs in protests calling for racial justice and an end to police brutality.

But it is probably a longshot for any of these bills to pass during the remaining nine days of the 40-day legislative session despite the swelling movement behind demands for justice. Republican House Speaker David Ralston resumed the suspended session Monday with forceful support for a pending hate crimes bill. But he said Tuesday other attempts to make changes that might have helped prevent recent violent deaths, like repealing the Civil War-era citizen’s arrest law, should wait after this session. Barring the governor calling legislators into a special session before next January, that means next year.

The powerful Blue Ridge Republican called them “big subjects” that he didn’t want to rush. Time runs short for lawmakers to trim more than $2 billion from a recession-squeezed budget with 11% across-the-board cuts ordered by Gov. Brian Kemp. The 236 lawmakers are operating at a slower pace so far this week, taking time for safety protocols to avoid spreading COVID-19, but many are still pushing other priorities that will compete for the remaining time before they adjourn.

“Reforming citizen’s arrest and policing reform, I think, are topics that are worthy of discussion,” Ralston told reporters Tuesday. “But you certainly don’t want to tackle issues like that in haste.”

His Democratic counterpart disagrees. This is the perfect time to tackle those issues, said House Minority leader Bob Trammell.

“We have a tremendous opportunity with the time that we have in the session to take up a vote on some of these measures, and it would be a tremendous missed opportunity if we let that go and didn’t take those measures up,” Trammell said Tuesday. “It’s hard to imagine us getting out of this legislative session without passing some type of substantial reform.”

Trammell authored a bill to prohibit no-knock search warrants, which occur when police enter a home without warning.

It was a no-knock warrant that led to the death of 26-year-old Breonna Taylor of Louisville, Kentucky. The emergency medical technician was shot to death by police looking for someone at a different address. In 2006, Atlanta Police made a similar fatal mistake when they shot and killed 92-year-old Kathryn Johnson during a deadly no-knock raid in her home.

“I think no-knock warrants are of questionable constitutionality,” Trammell said. “We have the ability to avoid these tragic outcomes, like in the Breonna Taylor case and the Kathryn Johnson case in Atlanta a little over a decade ago, by simply prohibiting no-knock warrants.”

Protests grew in Georgia and across the country after the death of George Floyd on Memorial Day when a Minneapolis policeman kneeled on his neck until he died. A bill from East Point Democratic State Rep. William Boddie would create a new crime called aggravated strangulation by a peace officer.

An officer could spend up to 20 years behind bars for killing or seriously injuring someone by putting them in a chokehold or otherwise strangling them when the use of deadly force is not justified.

Officers are not trained in chokeholds, said Georgia Sheriffs’ Association Executive Director Terry Norris, and the technique is not approved to restrain suspects.

“For the most part, a chokehold would be considered a survival tactic, as with the use of a firearm or the use of a baton,” he said. “If you’ve got an officer overcome by a much larger, stronger, possibly younger suspect, and it is the only way that officer is going to survive that encounter, that chokehold should be used, but as far as a technique for restraining someone, I don’t know of any training currently that encourages that, but it is a survival tactic that must not be eliminated.”

An officer would not be charged for using a chokehold against a suspect in a deadly situation under his proposed law, Boddie said.

South Cobb Democratic Rep. Erick Allen’s focus is on body cameras. His legislation proposes that all state, local and county officers who conduct traffic stops or respond to emergency dispatch calls wear body cameras by July 2021. Departments that miss the deadline would lose state funding and access to any federal money administered by the state.

The camera’s footage would be a publicly available record, in most cases, except in arrests that show victims of domestic violence, sexual assault or expose bystanders to harm.

Body cameras can help protect officers as well as the public, but they can also be expensive, especially for smaller departments.

“Some agencies cannot afford the cameras, but the real cost is the storage and retrieval of videos,” Norris said. “There are some agencies that don’t have them, and the reason is cost. If a bill were to be passed in Georgia that says all peace officers have to wear body cameras, or defining the types of officers that have to wear the cameras, then we’ll have to deal with and respond to that legislation, but in the past, it’s been a cost factor.”

The devices are so helpful that they should be considered essential for any officer on the streets, Allen said.

“I have never heard a police chief complain about the fact they can’t afford a service pistol or a night stick or anything else,” Allen said. “We have to realize for the protection of officers and the public and in the name of transparency, that this is an expense of the service.

“Quite simply, technology and the times have changed to where we have the ability to do this in a reasonable fashion without it being a burden on officers,” he added. “I know there’s going to be some resistance, but if we stop and think about the layers of transparency this can give to our officers and the public, I think it’s an investment that’s well worth it.”

Rep. Sandra Scott, a Democrat from Clayton County, proposes to require police officers to train more to de-escalate confrontations, especially for people suffering from mental health or substance abuse issues. Critics of the handling of the deadly Rayshard Brooks DUI arrest by Atlanta police last Friday night say the officers who confronted him behind the wheel in a Wendy’s restaurant drive-thru had a reasonable chance to end the interaction without an officer shooting him while running away.

Norris declined to comment on the specific language of the bills, but he said Georgia’s law enforcement officers are committed to doing their jobs safely.

“I can say this unequivocally: Nobody that puts on a uniform in the morning wants to hurt anyone,” he said. “Nobody. It is the worst day in any officer’s life, based on the readings I have endured on the subject, when they have to shoot someone or use deadly force, but it happens, and it happens in spur of moment.”

Reducing the number of deadly police incidents will require cooperation between police and the public, he said.

“We all need to settle down and be responsive to lawful commands of police, and police need to be responsive to needs of individuals taken into custody,” he said. “None of our people want anybody hurt. We want a safe resolution to every encounter.” 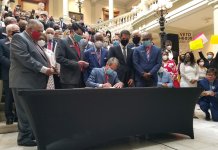