Fayette County’s Kamesha Frazier knew the call announcing she would be furloughed was coming ahead of time.

Frazier’s worked in the hospitality business since 1997, most recently as a revenue manager for a company that supports Hilton, Marriott, Hyatt and IHG hotels. She tracks trends in hotel occupancy, and by the time she got the call in mid-March, the 180 properties managed by her firm sank below 15% occupancy.

“I knew it was going to happen,” she said. “I have worked in hotels for over 20 years and in revenue management for 15 years, so I read data and analyze trends. We initially had a meeting back in February and changed our revenue strategy across all hotels because we began seeing changes in demand since mid-January.”

Nationwide, employers let go more than 8 million leisure and hospitality workers since March, according to the U.S. Bureau of Labor Statistics. In Georgia, nearly 131,000 workers filed a new claim for unemployment benefits last week. That represents a drop of about 4,000 over the week before, though still exponentially higher than the few thousand per week at the start of the year. More than2.5 million Georgians have applied for unemployment since mid-March, when fears of COVID-19 spurred business shutdowns and travel restrictions.

With travel and large gatherings stopped cold, the layoffs have been particularly brutal for hotel workers across the state. Among the biggest are the Atlanta Marriott Marquis, which laid off nearly 800 people; the Ritz-Carlton on Lake Oconee, which let 440 workers go and the Westin convention hotel in Savannah, which dismissed 244 employees.

Georgia’s state and local governments can expect to lose over $335 million in tax revenue from the hotel industry because of COVID-19, a report by Oxford Economics for the American Hotel & Lodging Association.

“At the turn of a switch, it all stopped,” said Georgia Hotel & Lodging Association Executive Director Jim Sprouse. “We went from anticipating the best travel year in history to the greatest loss in history – nine times worse than 9/11. Nationally, six in 10 hotel rooms are empty. That is up from earlier when eight in 10 rooms were empty. Many hotels suspended services until the demand returns. It is just not possible to keep the building open with single digit occupancy.”

As a hub for travel and conventions, Georgia’s hoteliers were hit harder than those in other states, Sprouse said.

“When the crisis hit, groups rescheduled and rescheduled again,” he said. “Eventually, some cancelled for the year. Large events are scheduled years in advance, so that business cannot be rebooked in the short term.”

A modest recent gain in hotel room rentals is attributed to leisure travelers staying in rooms within driving distance of their homes. That means luxury and large hotels are left empty at higher rates than motor courts and extended stay hotels, though the smaller hotels are struggling too, Sprouse said.

“The question is when group business will return,” he said. “The numbers will have to dramatically increase to be meaningful. You can find pockets where leisure travel is increasing for vacationers. We expect that return to normal will be years away. That is a timeline that has slipped repeatedly. A month ago, we would have said 18 months, and now I most often hear that it will be a two to three-year recovery for our industry.”

For Frazier, what began as a furlough turned into a layoff Thursday. She cares for two children as well as her father, who suffered a stroke in 2018.

She applied for unemployment benefits in April and started receiving them last week, just as her savings were about to run out. She was also approved for food stamps and took a part-time job at Publix to help make ends meet.

“We were good because of my savings,” she said. “I had three months. If I didn’t get my unemployment insurance this week, July would have been another story. I recommend at least six months of savings, but we all aren’t able. My dad was pretty well, health-wise. With us being sheltered in place, he didn’t have any contact with the outside world, which is a good thing.”

Unemployment benefits helped Frazier get back on her feet, but she’s eager to get back to work. She’d love to get back into the hotel industry, but she does not expect there will be openings any time soon.

“I am figuring out what’s next,” she said. “I have been in a specialized career for 23 years. I will pick up more hours at Publix as I get more comfortable living in this COVID world, especially with my dad living with us. I am researching what career paths I can transfer my education and skill set to. I realize I may be starting at entry level again, but anything is better than nothing.” 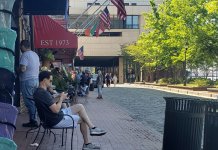