WASHINGTON — The U.S. Supreme Court on Wednesday upheld a Trump administration effort to exempt employers with religious or moral concerns from complying with a “birth control mandate” in the Affordable Care Act, the Obama-era law that requires employer-provided insurance plans to cover contraceptives.

Georgia Attorney General Chris Carr joined with counterparts in several other states in a filing that argues in favor of the federal government’s exemption for religious organizations.

It was one of a pair of 7-2 decisions the court issued on Wednesday in which liberal justices Elena Kagan and Stephen Breyer joined the court’s conservative majority. In the other, the court threw out a pair of workplace discrimination lawsuits filed by teachers at religious schools.

Justices Ruth Bader Ginsburg and Sonia Sotomayor dissented in both.

The birth control provision in the ACA dates to 2011 when the Obama administration said employers and insurers had to provide birth control at no cost. Houses of worship were exempted but not nonprofits affiliated with religious organizations. The Trump administration finalized new rules in 2018 that expanded exemptions to employers based on religious or moral beliefs. Pennsylvania and New Jersey challenged the new exemptions, arguing that they would place a burden on state agencies as women would turn to them for help. A federal judge in Philadelphia agreed and issued a nationwide injunction in January 2019 to block the rules from taking effect.

A federal appeals court upheld that decision, prompting the Trump administration and the Roman Catholic organization at the heart of the case — Little Sisters of the Poor Saints Peter and Paul Home in Pittsburgh — to appeal to the Supreme Court.

“For the past seven years, they — like many other religious objectors who have participated in the litigation and rulemakings leading up to today’s decision — have had to fight for the ability to continue in their noble work without violating their sincerely held religious beliefs,” Justice Clarence Thomas wrote in the majority opinion.

The federal government, he continued, “has arrived at a solution that exempts the Little Sisters from the source of their complicity-based concerns — the administratively imposed contraceptive mandate. Therefore, we reverse the judgment of the Court of Appeals and remand.”

Chief Justice John Roberts joined the opinion, as did Justices Samuel Alito, Neil Gorsuch and Brett Kavanaugh. Kagan and Breyer agreed that the case should be remanded back to the lower court but did not join the majority opinion.

In her dissent, Ginsburg said the decision “leaves women workers to fend for themselves, to seek contraceptive coverage from sources other than their employer’s insurer, and, absent another available source of funding, to pay for contraceptive services out of their own pockets,” The free exercise clause in the First Amendment of the U.S. Constitution, she added, “does not call for that imbalanced result.”

Adam Sonfield, associate director of policy analysis at the Guttmacher Institute, an abortion rights think tank, said the ruling severely undermines contraceptive coverage guarantee under the Affordable Care Act. “This would be a harmful outcome under any circumstances, and particularly during a pandemic and a recession,” he said in a statement.

“If we step back, we can see the pattern and the underlying, coercive motivations behind the Trump administration’s actions. This attack on private insurance coverage of contraception is tied to the administration’s destructive overhaul of the Title X national family planning program, its relentless attempts to gut the Affordable Care Act, its harmful ‘refusal of care’ rules, and its ongoing efforts to ‘defund’ Planned Parenthood and undermine Medicaid coverage of family planning care.”

Arizona, Florida, Georgia and Tennessee are among the states that argued in an amicus brief that “the federal government rightly sought to provide an exemption to the Little Sisters of the Poor and similarly situated objectors, and the lower courts were wrong to stand in the way.”

Maine, Maryland, Michigan, Minnesota, Nevada, North Carolina and Virginia are among the states opposed to the administration’s policies. They told the Supreme Court in an amicus brief that the administration’s exemptions “make women’s access to contraceptive coverage contingent on the religious and moral approval of their employers” and that Congress intended for women to have full and equal coverage for preventive health care.

The court heard Little Sisters of the Poor Saints Peter and Paul Home v. Pennsylvania and consolidated arguments in Our Lady of Guadalupe School v. Morrissey-Berru and St. James School v. Biel in May.

The case involves a pair of elementary teachers at two Catholic schools in California — Kristen Biel and Agnes Morrissey-Berru — who sued their employers after learning their contracts wouldn’t be renewed.

Biel, who is now deceased, charged the school with discriminating against her because she had breast cancer. Morrissey-Berru charged her employer with age discrimination.

Lawyers for both argued that the schools violated Title VII of the Civil Rights Act, which prohibits workplace discrimination against people on the basis of disability, age, race, sex and other characteristics.

But federal trial courts disagreed, citing a legal doctrine that prohibits ministers from suing religious institutions for employment discrimination. The so-called ministerial exception is designed to preserve the separation of church and state by preventing governments from interfering in religious matters.

The U.S. Court of Appeals for the 9th Circuit reversed the lower court rulings on the grounds that the exception does not apply to Biel and Morrissey because, as teachers, they did not play the same kind of leadership role that ministers do.

But the high court disagreed. In his majority opinion, Alito explained that “the religious education and formation of students is the very reason for the existence of most private religious schools, and therefore the selection and supervision of the teachers upon whom the schools rely to do this work lie at the core of their mission.”

The First Amendment, he noted, allows religious institutions “to decide for themselves, free from state interference, matters of church government as well as those of faith and doctrine.”

In her dissenting opinion, Sotomayor called the result “profoundly unfair.” The court, she said, “is not only wrong on the facts, but its error also risks upending anti-discrimination protections for many employees of religious entities.”

Virginia Attorney General Mark Herring, a Democrat, filed a brief on behalf of the teachers, urging the high court to affirm the appellate court ruling. Attorneys general for Colorado, Michigan, Minnesota and Nevada were among those that signed on.

The brief said states have a substantial interest in the case because the court’s decision defines the “boundaries of the balance” between employers’ rights to religious autonomy and employees’ right to freedom from discrimination.

Most states ban employment discrimination on the basis of age and disability, according to the National Conference of State Legislatures.

Georgia bans government employer discrimination based on race, color, religion, national origin, sex, physical or mental disability and age 40 and above. Private employers that engage in interstate commerce are banned from discriminating in pay based on gender or disability.

In Georgia, 4,779 EEOC discrimination complaints were filed last year with more than 31% based on disability and 17% based on age. Less than 4% were based on religion.

Wednesday’s decision comes on the heels of another victory for religious schools last month, when the court ruled that states must grant them access to the public funding they make available for private secular schools. Nearly 6 million students across the country attend some 35,000 private schools, most of which are religious, according to the Council for American Private Education.

Earlier in the month, the court expanded protections from workplace discrimination in a ruling that employers can’t legally fire people because of their gender identity or sexual orientation. In a 6-3 opinion, the court ruled that employers who fire individuals “merely for being gay or transgender” violate the Civil Rights Act.

Also last month, the court struck down a Louisiana law that critics said would have severely limited access to abortion in Louisiana and opened the door to further abortion limitations around the country. Enacted in 2014 by the Louisiana state Legislature, the law would have required physicians who perform abortions to have admitting privileges at a local hospital. 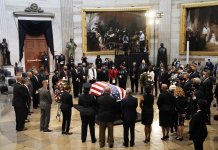