A middle Georgia water system will have to comply with pollution limits aimed at protecting the water quality of a popular stretch of the Chattahoochee River known for whitewater rafting after a state panel rebuffed its objections, although a legal challenge is likely.

The Columbus Water Works has fought water quality regulations that it says the state is relying on to require monitoring for fecal coliform bacteria where wastewater from its combined sewer and stormwater system enters the river – as opposed to farther downstream.

The city system is one of a handful of older systems in Georgia built to collect rainwater runoff and domestic sewage in the same pipe.

“What we’re talking about here is the potential to discharge untreated domestic sewage into the river,” Jac Capp, chief of the Watershed Protection Branch, said during a virtual meeting held Monday. “So, we do believe that there is reasonable potential to violate the water quality standards for bacteria when that is happening.”

But the Columbus system, which has hired Atlanta-based King and Spalding, has signaled that it might take the state to court over a requirement it calls unnecessary, costly and bureaucratic.

Lewis B. Jones, a partner with King and Spalding who is representing the system, said in a statement Monday afternoon that Columbus Water Works has made $100 million in improvements at its facility – improvements he said EPD approved. It would cost another $2 million to comply to comply with the permit requirements, plus hundreds of thousands of dollars each year, Jones said.

“To be clear, Columbus Water Works is 100% committed to protect the Chattahoochee River. We work and raise our families here and understand that a healthy river is essential to our quality of life,” Jones said.

“We would spend more if more were required, but all agree the plan worked, and the river is already clean. We object to wasting money to comply with shifting demands by EPD that will not improve water quality.”

At the center of the dispute is what are called total maximum daily loads, which are specific to a site and a pollutant. There are at least 1,800 of these limits designed to protect Georgia’s waterways under the Clean Water Act.

The city system asked the state Board of Natural Resources to rethink how the state agency it oversees crafts these limits for pollutants, specifically pushing for the appointees sitting on the board – and not staff – to finalize them.

The board rejected the request Monday after the state Environmental Protection Division staff staked out a position against the request. The state plans to move forward with the Columbus Water Works’ permit renewal, which has been in limbo since it expired in 2015.

The Chattahoochee Riverkeeper, which applauded the board’s decision, has backed the proposed new permit for the Columbus Water Works.

“We need more data on water quality in this stretch of river, particularly during and after rainfall,” said Kevin Jeselnik, general counsel for the Chattahoochee Riverkeeper.

“The elements in the draft permit we strongly support include the inclusion of end-of-pipe pollutant limits, as well as additional instream water quality monitoring, so that we know whether after storms the river is safe for human contact.” 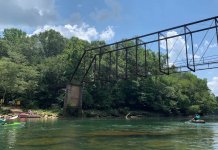