As you probably expected, the Southeastern Conference dominates the preseason national rankings.

As of Tuesday, Florida could claim the title of No. 1 in the country, reporting the highest weekly per-capita death rate from coronavirus nationwide. Go Gators!

Texas, home of the Texas A&M Aggies, had the second-highest per capita death rate, followed by Mississippi at No. 3 and Louisiana at No. 4.

Georgia was sixth in the country. South Carolina was seventh, Tennessee was ninth and Missouri ranked tenth. That’s eight out of the Top Ten, right here in the SEC. Well done, SEC Country. Well done.

Until recently, Alabama was highly ranked as well, but more than a month ago it instituted a statewide mask order and has since dropped to 18th in per capita deaths. Even conference laggards Kentucky and Arkansas rank 24th and 25th, and when every state in the conference ranks in the national Top 25, that doesn’t happen by accident.

Looking at those numbers, it hard to believe that the SEC will be trying to play football this fall when other major conferences have decided against it. In Georgia, Florida, Mississippi and other states, we haven’t proved that we can do the normal things safely – in fact, with such high mortality rates across the region, we’ve proved the opposite.

So what on earth makes us think we can pull off football safely? According to its marketing slogan, “It Just Means More” in the SEC, but I don’t think that quite explains it. What makes us different isn’t that it means more, but that it means less.

Our secret is that we just don’t care.

How else do you explain that on Sept. 26, opening day, a team from virus-stricken Florida will travel to virus-stricken Mississippi, or a team from Tennessee will travel to Texas? How else do you explain why LSU will travel from the fourth-worst state in the country across the border to the third-worst state in the country, to exchange sweat, spit, breath and blows at close quarters with Mississippi State?

Then, after the games, those teams will turn around and go back home, perhaps bringing souvenirs to friends, classmates, professors and loved ones.

It doesn’t have to be like this. We have six months of experience now with the virus; we have a much better idea how it spreads, and how to slow or stop it. The science is becoming pretty clear, and by now we also have successful role models to emulate, should we choose to do so. For example, we could look to Germany, which has eight times the population of Georgia but which suffered just 27 coronavirus deaths from Aug. 10 to Aug. 17.

In that same week, Georgia suffered 516 deaths attributed to coronavirus.

If we really gave a damn, if we really cared, if our reverence for human life was really as strong as we claim, it would bother the people and leadership of Georgia to know that each week, we are killing 500 more of our own people unnecessarily. But it doesn’t register. We just don’t care enough to make the small sacrifices needed to keep each other alive, and every week another few hundred Georgians pay the price for that. 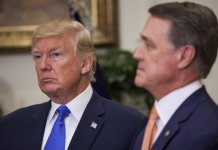 Bookman: No need to adjust your set if you don’t recognize TV Perdue