Home COVID-19 School’s in for most Georgia students, many online and all disrupted by...
Facebook
Twitter
Email
Print

Gwinnett County attorney Elaine Nietmann’s son made the trek home from school Wednesday for the first time since March.

“He was so happy to be back in the classroom,” Nietmann said. “And I’m so glad that he’s finally getting to learn again, because he doesn’t get those years back like regular kids. Once it’s gone, it’s gone. He’s already behind those regular kids. He has the learning level of maybe a one-year-old. So if you’re talking about missing a whole year of school, what do you expect for that child’s future?”

Nietmann’s son, a third-grader, is in the special education program at his school. That means he’s part of the first wave of children heading back for in-person learning in the state’s largest school district. Special needs students, along with kindergartners, first-graders, sixth-graders and high school freshmen came back to school Wednesday after starting the school year online Aug. 12. The district plans to continue adding more grade levels until all students have the option to study in-person.

About 2 million public school students across the state headed back to class this month, whether virtually or in-person, but district plans remain fluid, with some systems shifting back and forth between formats as COVID-19 continues to spread in the state.

Wednesday, U.S. Secretary of Education Betsy DeVos acknowledged the balancing act public schools are trying to pull off during a visit to Forsyth Central High School, although she has pushed for getting students back in the schoolhouse.

“There’s been a misunderstanding that 100% of the students have to be in person 100% of the time,” DeVos said during her Forsyth County visit. “No, there’s an expectation there is 100% learning in a way that’s going to work for each family and each student.”

Before Wednesday, Nietmann was taking her son to her law office for digital instruction, which made getting her own work done a challenge.

“I would pretty much tell clients I can meet them on weekends or after hours,” she said. “And if we had court, I’d pray it was Zoom, and then he could play in the playground in the backyard, and I’d go home and I’d do the Zoom on the deck so you can’t see him running around.”

Students in Decatur County schools in rural southwest Georgia are set to go back to in-person classes Friday after starting the semester online.

The decision is based on the local spread of the virus with consultation from the county health department, said Superintendent Tim Cochran, but officials also had to consider the district’s limited online availability.

“Forty percent of our students don’t have online access, so to stay virtual would result in the kids falling behind,” he said. “We’re aware of that, and aware of the challenges of trying to school a kindergarten through second-grade child at home, even if they have online access, it’s difficult to ensure that they’re getting what they need.”

Masks will not be required, as is the case in Forsyth and many other districts. But the schools will offer increased safety precautions, Cochran said. He said he hopes the fact that 33% of his students chose to continue studying online will help keep the disease’s spread down, but he is not counting on having face-to-face classes all year.

“Hopefully it goes well, hopefully, we can navigate that and be successful in that. We don’t believe that maybe we won’t have to go back to a virtual platform at some point,” he said. “We do know the importance of face-to-face instruction, and so it’s our goal to try to to get as much done as we can in the time we have allotted, before we might have to shift back to virtual.”

That decision will factor in student and employee risk as well as local spread and hospital capacity, Cochran said.

But while some districts are moving back towards classrooms, one large district is planning to stay virtual.

“On July 16, the Board approved delay of the academic calendar start date afforded us time to prepare, train, and ready our virtual mode of instruction,” the district said. “At that time, we were hopeful that transmission rates would be reduced to a safe level for a possible return to face-to-face operation by Labor Day. Based on the most recent data, it does not appear that the pandemic is slowing at a rate fast enough to return to in-person teaching and learning by Sept. 8, 2020.”

Some parents are not pleased with the distance-learning technology, like Savannah-area mother of two Rachel Flanigan. She is director of programs for advanced training at FlightSafety International, a company that conducts online aviation lessons. But she has to spend most of her day co-piloting her six-year-old son’s various online platforms and trying to keep the children on task.

“They said that this would be different than when it happened when they shut the schools down, that they would make sure it was all done in one app, and it’s not,” she said. “They lied. For my first grader to get his math homework, I have to go into Zearn, and then for him to get his classroom assignments, he has to go into his Zoom, and then to get itslearning assignments, he goes into itslearning. There are so many different applications for those children to have to log into. It doesn’t work.”

Flanigan wanted to put her children in private school, but couldn’t find an opening. She’s now sending them to the local YMCA every other week so she can get work done, something not every family can afford.

“If parents can’t work, what does that mean for the economy?” she said. “I understand teachers are nervous going back into the school systems, but I think the permanent effect it’s going to have on our children is going to be way worse than what COVID can do. And then we just got an email that they’re going to extend this even longer. And I don’t think they’re understanding how severe this is for so many families.”

Many teachers are largely relieved when districts keep things virtual given the circumstances, said Savannah Federation of Teachers President Theresa Watson. She said she’s also heard from quite a few parents who are not happy their children aren’t heading back to the classroom.

“It’s very unfortunate that they’re in that situation, but with anything, you have to have patience and not just be so focused on your situation, but focus on everyone,” she said. “It’s not educators’ fault that this virus is in the atmosphere, but we have to be patient and work together.”

The herky-jerky start to the school year in Cherokee County continues as well. The north metro Atlanta school system was among the earliest in the state to open its doors in early August and since served as a national focal point for back-to-school debates. Thousands of students and employees were asked to stay home, and three high schools moved to online instruction earlier this month due to widespread quarantines with a tentative plan to reopen Aug. 31.

Instead, the three schools, Creekview, Etowah and Woodstock high schools, are now scheduled to reopen Sept. 3 with a hybrid approach, with students alternating in-person and online every other day. That is expected to continue at least through Oct. 9.

Cherokee is another district that does not require students to wear masks to class and a contentious July school board meeting provided a preview of the tensions over mask wearing and class format that are playing out across Georgia this month.

During a recent visit to southeast Georgia, Gov. Brian Kemp praised schools and health officials for their work through the pandemic.

“It’s not like we ever thought we’d reopen schools without having any new cases. I think the schools and the public health districts are doing a good job of dealing with that. We’re in that battle with them to continue to help with testing, guidance, messaging, and just fight through the first few weeks of school but so far so good,” Kemp told reporters. 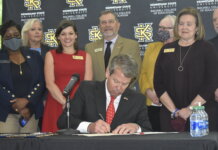 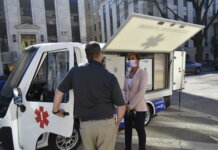 School’s in for most Georgia students, many online and all disrupted by virus