Long waits for midsummer testing appointments and results, a recent decline in cases and “pandemic fatigue” have all likely contributed to a steady – and troubling – overall decline in the number of Georgians who want to know whether they carry a virus that has claimed about 6,200 lives in the state.

The state tested 1,043 people per 100,000 as of last week, when testing dropped about 20% from the week before, according to the most recent White House Coronavirus Task Force report acquired by the Center for Public Integrity. That is down from 1,260 in mid-August, when testing spiked following a surge in new cases. The report notes that a reporting lag could undercount tests.

“We kind of hurt public confidence in the testing in July because we had people who were waiting two to three weeks for a test result,” said Dr. Amber Schmidtke, who is a former Mercer University School of Medicine professor and a medical microbiology and immunology expert who has been posting analysis of the COVID-19 pandemic.

“It ruins the benefit of going to get a test if we can’t deliver those results in a timely manner. People are going to lose faith and people are going to say, ‘I just don’t even want to know,’ and so that really does not help us in any way to get to the other side of this pandemic,” she said.

Dr. Jessica Smith Schwind, an assistant professor of epidemiology at Georgia Southern University, said she also suspects something larger at work: People are just COVID-19’d out.

“The biggest reason is likely ‘pandemic fatigue,’” Schwind said of what may be driving the decline. “We’ve been living with COVID-19 now for over six months. People may no longer take the disease seriously and may be less accepting of public health recommendations.”

Nancy Nydam, spokeswoman for the state Department of Public Health, acknowledged the role the earlier long waits to schedule appointments and lengthy turnaround times for test results likely played in the waning demand, as well as the public’s general weariness of COVID-19.

On the other hand, the average turnaround for testing results has also improved as demand has fallen. The typical wait varies depending on the lab, with some averaging a one-day response, others taking one and a half days and one lab taking about two days, according to Nydam.

“People have let down their guard about testing and prevention measures, overall,” she said.

‘Part of the solution’

Gov. Brian Kemp has voiced his frustration at times at the lack of people lining up for a resource considered an essential part of curbing the spread of COVID-19.

“You can’t blame the government because people don’t want to go get tested,” the Republican governor said last month at a heated press conference.

Thursday, Kemp called on people who participated in large Labor Day gatherings to get tested. He was concerned enough going into the holiday weekend that he traveled the state beforehand to urge safety and try to combat a lax mood toward the virus that could result in another surge in cases. If there is a spike, it will take weeks for it to show up in the testing – assuming people get tested.

“To prevent increased community spread following the holiday weekend, we are asking all Georgians who participated in gatherings, were not able to socially distance, or who may have been exposed to the virus to schedule a COVID-19 test,” Kemp said in a statement Thursday.

“To stop the spread of COVID-19, Georgians must be part of the solution and not the problem, as we have said from the beginning.”

The governor’s office has been touting the state’s declining COVID-19 cases and hospitalizations, as well as a positivity rate that has shrunk even as fewer people sought testing.

Georgia’s seven-day average for its positivity rate was 8.2% as of Tuesday, according to a status report from the state Department of Public Health. The state was still, however, in the yellow zone for positive tests as of last week, with the 19th highest rate in the country, according to the latest White House Coronavirus Task Force report.

But public health experts say the drop in testing is concerning. They say the state should be testing more people, not less, particularly as some students and staff return to K-12 and college campuses.

“At this point in the pandemic, the number of tests conducted each day should not be decreasing. This is definitely a step in the wrong direction,” Schwind said.

The state Department of Public Health runs about 180 testing sites across the state. More than 2.5 million tests have been given since COVID-19 first hit the state in the spring, with about 289,000 confirmed cases. Anyone can still request a test, regardless of symptoms.

The governor said last month that he was looking at dispatching mobile testing strike teams to hotspots as an answer to the decline in testing, but a spokesman for his office said this week that the federal funding to once again call on the National Guard for this mission had not yet been approved. A mega site set up at Atlanta Hartsfield-Jackson Airport is also set to close Friday.

Some critics of the Kemp administration say the state should be more aggressive in pushing testing. State Rep. James Beverly, a Macon Democrat who chairs the House Minority Caucus, said he believes the governor should use his public health emergency powers to require more testing, such as at schools, to identify asymptomatic cases.

“Until we set that standard, I think we’re playing whack-a-mole,” Beverly said. “I think that’s the wrong way to do it and I think the governor’s executive order is very powerful and could set the standard.”

Melissa Brantley, who is the spokeswoman for the Dublin-based South Central Health District, offers another possible explanation for the decline in testing: Fewer positive cases could just mean less demand for tests.

She points to the testing totals in some of her district’s counties in middle Georgia. Back in mid-July, when cases across the state surged, upwards of 300 tests a day were administered at the Laurens County testing site in the health district’s largest county. That has recently fallen to about 100.

“I think it supports the theory that the more cases, the more testing is needed. The fewer cases, the fewer people are going to come out and be tested,” Brantley said.

Even with cases declining, public health experts say robust testing is still a critical component of slowing the spread of COVID-19.

“It’s important to get the word out that there is plenty of capacity right now, that we have the ability to get these tests done, and honestly, the thing about the virus is it doesn’t care if we know who’s positive or negative – it’s going to continue to spread,” Schmidtke said.

“So, we can either be blind to that reality or we can know where things are happening and try to stop it,” she said. 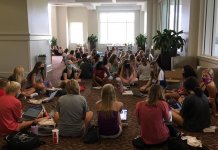