Georgia Southern University’s Dr. Isaac Chun-Hai Fung stays away from campus these days unless he has a class to teach, and he’s not the only one avoiding the Statesboro school’s grounds when he can.

“There are certainly fewer students on campus compared to last year at this time, compared to the pre-pandemic situation,” said Fung, associate professor of epidemiology at the Jiann-Ping Hsu College of Public Health at Georgia Southern. “The number of students is certainly significantly lower.”

About half of the students he teaches, all of whom are graduate students, are studying digitally, either because of a potential exposure or because they or a family member has a medical condition that may make them more vulnerable to the disease, a decision Fung endorses.

“I’m not sure I would do the same thing if I were teaching 18-year-old freshmen, but I am teaching graduate school people,” he said. “Those students already have a bachelor’s degree, and they’re here to get a master’s in public health, so I trust them. And obviously, because they are all public health graduate students, they are hyper-conscious about health.”

Some professors who teach undergraduates do not feel they can give that kind of leeway, according to the Georgia Southern Chapter of the American Association of University Professors.

“Faculty members are receiving emails daily from students who live with an at-risk person in their household, and/or simply do not feel safe on campus despite the university’s efforts,” the union wrote in an open letter to university leadership. “Yet, without medical documentation stating they are in a high-risk group, faculty have very few options to help these students, given the administration’s direction to provide accommodations only to high-risk students.”

The letter, which is signed by 670 faculty members, staff, students and parents at 19 University System of Georgia colleges, calls for Georgia Southern to move to fully online classes.

Bulloch County, home of Georgia Southern, has become a hot spot for COVID-19 since classes started back Aug. 17. The 7-day average number of cases reported rose from about 12 in late August to 84 in early September.

“We ask the administration to take this action to demonstrate its stated commitment to prioritize the health and safety, not only of the university community, but also the broader Statesboro, Savannah, and Hinesville communities,” the union wrote. “It is not hyperbole to suggest that the lives of Georgia residents living in these locales are in the hands of USG Chancellor Wrigley and the Georgia Southern administration.”

Fung’s name does not appear on the petition. For him, the question is not whether the school should stay open or close, but whether it will receive the help it needs to stay open, and, if not, how many classes can safely be taught in person.

“If they want the campus open, fine, but put more resources in so that we can do the testing, the contact tracing, the isolation and the quarantine,” he said. “If they fail to provide the resources, I understand there are financial constraints for the state, then maybe they can convert more courses into online format. I’m not saying they need to close the campus and bring everything online, but it is also not an either/or.”

Schools, especially smaller ones, need help administering testing and housing students who are ill or who have been potentially exposed, Fung said. If the university system cannot provide that assistance, it could direct more classes without hands-on elements to be held online temporarily while helping students in classes that need the in-person touch study safely, Fung said.

“In reality, there are a multitude of options. I think (the Board of Regents) made a decision by not making a decision. They just let the epidemic unfold. Doing nothing is also doing something. They are doing the least, basically. There are multiple options they can do. If the Board of Regents doesn’t have the resources, they can ask the governor and the Legislature. It’s in the public welfare of the citizens, of the voters.”

The university system has been working since the pandemic reached Georgia to keep students, faculty and staff safe, said system spokesman Aaron Diamant.

“As part of a comprehensive planning effort begun last April, all 26 USG institutions developed plans for their campuses based on guidance from the CDC, the Georgia Department of Public Health and the Governor’s Coronavirus Task Force,” Diamant said. “Those plans are now in place and have worked to limit the spread of COVID-19 on campus. They include testing protocols, contact tracing programs and procedures for quarantine and isolation of those who test positive for COVID-19.”

The university system has purchased more than 67,000 tests to supplement supplies bought by individual institutions, and schools have options to test on campus or partner with off-campus facilities, Diamant said.

Protocols for testing, reporting and isolating vary among the university system of Georgia’s 26 institutions. At Georgia Southern, which only tests students who show symptoms, 363 cases have been recorded. Of those, 126 were confirmed through the university and 237 came from other sources.

Other schools’ plans call for surveillance testing for people without symptoms to help track the spread of the disease.

The University of Georgia’s plan involves administering 450 voluntary tests per day, totaling 24,000 tests by Thanksgiving faculty. The university has an enrollment of about 39,000 and a workforce of nearly 11,000, according to its website.

The university reported more than 1,400 new COVID-19 cases in the past week, bringing its total to nearly 2,600. The rate of positive tests has also increased over the school year. Just over 8% of surveillance tests returned positive last week, compared with 5.3% the week before.

But COVID-19 tests are not always easy to find, said University of Georgia sophomore Riley Grube.

“Last Wednesday, I found out that I had been exposed to COVID 13 days prior,” she said. “Although it had almost been two weeks, I just wanted to get a test to be sure. I went to sign up on UGA’s surveillance testing, and it was backed up for over a week.”

Grube said she has heard from classmates who have also had a hard time finding a place to be tested.

“I do not think UGA students trust the system UGA has set up,” Grube said. “I had to go to a place in Athens off-campus to get a test, and I know people who drove 45 minutes to Gwinnett just to get a test. This is incredibly inaccessible for students without cars, and I think it’s a testament to how poorly UGA is doing with testing.”

Grube lives off-campus, and studies online for all but one of her classes.

“I went to that class today, and there were only six people there when there were supposed to be 10, so I am assuming that those people are either sick or in quarantine, but we have no idea,” she said.

In the absence of concrete information, rumors are spreading and students often feel they don’t know what is really going on, Grube said.

“I think broadly there’s been a lack of transparency from UGA and (the University System of Georgia) about what classes are supposed to look like and case numbers,” she said. “Nobody really trusts the little information we are getting, so that is concerning. Overall, no one really knows what is going on, and this has been an ongoing problem since March because of the poor communication from UGA and USG.”

For some students and parents, the thought of a return to online-only classes is more frightening than COVID-19.

Joy Morin of Oconee County is an administrator of a Facebook group with over 5,000 members, all of whom support keeping Georgia colleges open.

Many members say students do not get the same quality education on a screen as they do in-person. Others say young people need the support of their peers and struggle with loneliness and depression when they are isolated.

Morin points to a Centers for Disease Control and Prevention report showing Americans between 18 and 24 were significantly more likely to have seriously considered suicide in the last 30 days than before the pandemic — more than 25%, compared with 10.7% for the population as a whole.

Nearly three quarters of respondents between 18 and 24 reported at least one mental health symptom in the survey, with the number dropping to just under 52% for people between 25 and 44.

Morin said her son Zach, normally a laid-back guy, had a hard time adjusting when his high school classes went online in the spring. He had worked hard to become a starter on his school’s varsity soccer team, but he didn’t get to play his final season, and that was a big disappointment.

“We saw him really struggling, and he’s pretty easygoing,” she said. “A lot of his friends were struggling, just wondering, ‘When does it end? And what does it look like on the other side?’ So when it became clear that they were going to let the kids move onto campus, it was a very easy decision.”

Zach Morin is now a freshman at UGA and staying in a dorm.

Two of his classes are 100% online, one is mostly online, and one meets in-person once a week. Though it’s not the typical college experience, he’s learning and much happier than he would be staying at home, his mother said.

“It’s not what he was hoping or expecting, you know, initially when he was accepted and was looking forward to going, but he’s just glad to have what he’s gotten. It’s better than nothing,” she said.

Joy Morin said she was skeptical at first about sending her son to live in a dorm to study mostly online, but she came around after helping him move in.

“The move to college represents the first big step to independence,” she said. “It is so important to keep them moving forward.” 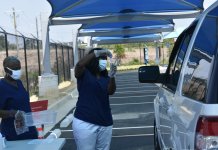