Loeffler, Warnock in runoff as Democrats struggle for U.S. Senate

Republican U.S. Sen. Kelly Loeffler and Democrat Raphael Warnock survived a wide-open primary and now are heading to a runoff that could decide control of the U.S. Senate. Photos by Georgia Recorder staff

WASHINGTON — Democrats gained at least one seat against Republicans in the U.S. Senate, but also lost one of their own and were unable to defeat several GOP incumbents in the elections, ending up early Wednesday with an increasingly challenging path to wresting control of the chamber away from Republicans.

In Georgia, Republican U.S. Sen. Kelly Loeffler is headed to a runoff with Democrat Raphael Warnock after U.S. Rep. Doug Collins conceded to her Tuesday night, setting up a race to the finish set to last until early January. Votes were still being tallied Wednesday morning in the contest between Sen. David Perdue and Democratic challenger Jon Ossoff, another key race in the fight for control of the chamber. That race could also go to a runoff. 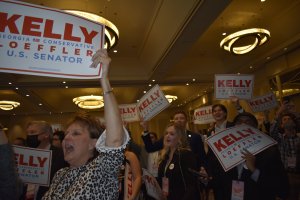 The initial results showed a disappointing night for Democrats, and made the prospect of another two years of a politically divided Congress more likely, even as lawmakers struggle to come to an agreement on an economic relief package amid the pandemic.

In Colorado, Democrats succeeded in flipping the seat held by GOP Sen. Cory Gardner, a first-term lawmaker seen as one of the most vulnerable Senate Republicans this cycle. He struggled in his reelection race against Democratic former Gov. John Hickenlooper, who also sought the presidential nomination this year.

“Regardless of which party ends up controlling the Senate, I want you to know what I will work with anyone and everyone to help Coloradans,” Hickenlooper said.
Gardner pledged to assist Hickenlooper in the transition, and called for unity: “Please understand, to all the people who supported our efforts tonight, that his success is Colorado’s success, and our nation and our state need him to succeed.”

Other Senate Republicans that Democrats had targeted held off their challengers.

In a neck-and-neck contest in North Carolina, Democrat Cal Cunningham had an early lead, but GOP Sen. Thom Tillis closed the gap as results trickled in for a 96,000-vote lead with 94% reporting. The AP and other news outlets hadn’t called the race when Tillis declared victory shortly before midnight.

“I have a very hard time right now seeing how Democrats win back the Senate,” Jessica Taylor, a Senate analyst with the nonpartisan Cook Political Report, tweeted early Wednesday morning, adding that the remaining path was “not impossible, but looking unlikely.”

Democrats headed into Election Day well-positioned to potentially regain a majority in the Senate, where Republicans hold 53 seats to the Democrats’ 47 (a tally that includes two independents who caucus with the party).

Flipping partisan control would require Democrats to pick up four seats, or just three if Democratic presidential nominee Joe Biden claims the White House, since his vice president would break any ties on the Senate floor.

Which party controls the Senate will have significant implications for the next president and his agenda. On the other end of the U.S. Capitol, Democrats were projected on Tuesday to maintain a majority in the U.S. House. If Biden secures enough votes to become president, his policy agenda could be blocked by a GOP Senate — and a Democratic one could give him the votes to sign his top priorities into law.

The clearest path for Democrats to flip the Senate was through winning GOP-held seats in Arizona, Colorado, Maine, and either Iowa or North Carolina, according to analysts who track those races.

Another Republican incumbent defended his seat from a Democratic challenger. In Montana’s Senate race, Sen. Steve Daines beat the state’s current governor, Steve Bullock, with 53% percent of the votes as reported by the AP.

Georgia has two Senate races, where several scenarios can play out and the outcome of each race could take up to days or longer.

One race is a special election with Loeffler, who was appointed last year after Sen. Johnny Isakson stepped down due to health problems. She will face Warnock – the pastor of Ebenezer Baptist Church – on Jan. 5.

In a late Tuesday night speech delivered virtually, Warnock criticized Loeffler and Collins for their opposition to the Affordable Care Act and the GOP-led Senate for its handling of the COVID-19 pandemic relief.

“For the next two months, you’re going to see the petty and personal attacks that have become too much a part of the culture of Washington,” Warnock said.

“They’re going to try to distract us and divide us by making us afraid of one another, and here’s why: People who lack vision traffic in division. They cannot lead us so they will try to divide us. I submit that we’re all we’ve got. So, while they try to tear me down, I’m going to be busy trying to lift the families of Georgia up – because we’re all we’ve got.”

Loeffler’s political rival, Collins, wrote on Twitter late Tuesday that he called to congratulate the sitting senator as she heads into a runoff after a bitter contest between them.

“I look forward to all Republicans coming together,” he wrote. “Raphael Warnock would be a disaster for Georgia and America.”

Loeffler also quickly shifted her focus as she celebrated with supporters in the ballroom of the Grand Hyatt hotel in Buckhead.

“We have to fight the left. In January, I have one of the most radical opponents on the Democrat ticket in the whole country in the form of Raphael Warnock,” she said told the crowd.

Loeffler’s intraparty fight with Collins at times turned personal, leaving some to worry GOP voters would not come together for a runoff.

“There’s always fiery debates, but I do have to thank congressman Doug Collins, for service to our state to our country,” she said Tuesday night. “He’s a strong conservative, he supports our president he supports our country, loves his family. He’s a man of faith, and I am honored to have him on our team as we move forward into January, and we’re going to continue the fight together.”

Georgia’s other race, between Perdue and Ossoff, had not been called yet as of Wednesday morning. However, Perdue early Wednesday had a lead slightly above the 50% percent threshold with votes still being counted. Neither candidate made public remarks as the final votes were counted.

Republican Sen. Lindsey Graham of South Carolina kept his Senate seat, according to The Associated Press, in a competitive race against his Democratic opponent Jaime Harrison, who brought in a whopping $107 million in fundraising. Democrats had hoped to unseat Graham, a close ally to the president who shepherded the nomination of Supreme Court Justice Amy Coney Barrett through the Senate.

Another Republican that kept his seat was Sen. John Cornyn of Texas, a member of GOP leadership. He beat his Democratic challenger, MJ Hegar, according to the AP.
In Kansas, where the Senate seat held by Republican Pat Roberts was open, the AP declared Republican Roger Marshall the winner in the contest against Democrat Barbara Bollier.

But Democrats are defending far fewer competitive seats than the GOP is, an advantage that was bolstered by a polarizing Republican president whose struggles in the polls have not helped down-ballot Republicans. The party also kept its seat in Virginia, with Sen. Mark Warner’s reelection, which the AP called shortly after polls closed. However, Republican challenger Daniel Gade slammed the AP for calling the race and was refusing to concede late Tuesday.

Democrats also were boosted by a flood of campaign cash, as Senate races across the country shattered political fundraising records.

As of mid-October, eight of the top 10 most expensive Senate races have taken place in the 2020 cycle, according to the Center for Responsive Politics. And in Senate races, Democrats outraised Republicans, pulling in $726 million to Republicans’ $423 million through September.

Loeffler, Warnock in runoff as Democrats struggle for U.S. Senate

Laura covers the nation's capital as a senior reporter for States Newsroom, a network of nonprofit outlets that includes Georgia Recorder. Her areas of coverage include politics and policy, lobbying, elections, and campaign finance.

Ariana covers the nation's capital for States Newsroom. Her areas of coverage include politics and policy, lobbying, elections and campaign finance.