An aide working for Republican Georgia Secretary of State Brad Raffensperger says the Fayette audit revealed that an election worker failed to properly upload ballots cast during early voting. That will net the president another 495 votes from a Republican-leaning county of more than 114,00 people, still leaving him down nearly 13,000 votes to Biden.

But two weeks after Election Day, the previously uncounted votes prompted more insinuations and accusations from the president and his Republican allies that the news of discovered stored votes on memory cards is a sign of widespread problems with Georgia’s election.

Gabriel Sterling, voting system implementation manager for Raffensperger, said a measure of the audit’s success is that it is uncovering problems in Fayette, Floyd and Walton counties in the presidential race and confirming the result still isn’t likely to change.

“Human beings that are part of this are the weakest link in the whole system, but that’s why there are these checks and double-checks and triple checks that we do before we finalize the audit phase of this,” he said.

The votes that were found through our audit process here in Georgia in Floyd, Fayette, and Walton counties will be added to all races where votes were cast on those ballots. Both Senator Perdue and Bubba McDonald are still in runoffs even with these vote additions. #gapol

“Still reeling at how this election was so adamantly declared to have been “free from irregularity” before votes were counted, machines audited or returns certified,” Shafer posted on Twitter. “Thousands of votes were unlawfully counted in secret. Thousands more were mislaid and not counted at all.”

So far 110 counties that have completed manual audits reported a single-digit difference from the original tally. And 78 counties of those so far found no more than one discrepancy, Sterling said.

The secretary of state set a Wednesday night deadline for counties to submit final audit data that Raffensperger’s office expects to release after statewide election results are certified Friday.

Recount results won’t be released until Georgia’s 5 million ballots pass review. Based on the discrepancies so far, the first statewide tally is expected to be close to the final number.

“The only thing secure about our 2020 Election was that it was virtually impenetrable by foreign powers,” Trump tweeted Wednesday evening. “On that, the Trump Administration takes great credit. Unfortunately, the Radical Left Democrats, Dominion, and others, were perhaps more successful!”

Raffensperger is increasingly at odds with fellow Republicans over the integrity of an election he prepared to run for more than a year. In addition to Trump, Georgia GOP Sens. Kelly Loeffler and David Perdue last week called for Raffensperger to resign over unspecified election failures.

A forensic audit performed on a sample of voting machines across five counties determined there was no hacking during the election, the secretary of state said.

“When people are out there making bald-faced lies, you just have to call it out with facts who were basically fact bombing them with the truth,” Raffensperger said in an NBC News interview Tuesday.

State law requires an audit after a Georgia election, but because of the close race between Biden and Trump, Raffensperger ordered a hand count of every vote cast in the presidential election. Friday several national news outlets called Georgia’s race for Biden as his lead grew to 14,000 votes.

Raffensperger’s office also revealed Tuesday that it’s investigating Fulton County’s election office after absentee ballots were moved during a water leak at State Farm Arena on Election Day. Absentee ballots were still counted several hours after poll monitors were told that work was over for the night.

Fulton County officials said that a poll monitor from the secretary of state’s office watched workers continue to process ballots after most staff went home for the evening.

None of the absentee ballots stored at State Farm were moved from outside of the room when the leak occurred, a Fulton County statement said Tuesday.

“As Georgia’s largest county, we are accustomed to the spotlight and we welcome any investigation,” the statement said. “What matters most is not the criticism of our detractors, but our commitment to serving Fulton County voters.” 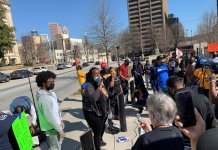