This post was updated Jan. 11 at 2:30 to include a statement by U.S. Rep. Carolyn Bourdeaux.

WASHINGTON — At least 214 Democrats in the U.S. House of Representatives have signed on to a measure to impeach President Donald Trump that was introduced Monday, charging him with inciting the insurrection at the U.S. Capitol last week.

Supporters of the impeachment effort say they would have enough votes to send charges against Trump — who is days away from leaving office — to the Senate for a second time.

There are 222 Democrats in the House and 211 Republicans, with one race still undecided and one vacancy, so Democrats would need 217 votes.

“Most important of all, I can report that we now have the votes to impeach,” Cicilline wrote on Twitter as he posted a copy of the resolution.

The impeachment measure accuses Trump of making statements that “encouraged—and foreseeably resulted in — lawless action at the Capitol, such as: ‘if you don’t fight like hell, you’re not going to have a country anymore.’”

“In all this, President Trump gravely endangered the security of the United States and its institutions of government,” the measure reads. “He threatened the integrity of the democratic  system, interfered with the peaceful transition of power, and imperiled a coequal branch of government. He thereby betrayed his trust as president, to the manifest injury of the people of the United States.”

Georgia’s newly sworn in Democratic Rep. Carolyn Bourdeaux of Suwanee is a co-sponsor of the impeachment resolution.  She said in a statement Monday afternoon the president should be held accountable.

“The outgoing President of the United States has incited an insurrection and attempted to overthrow the results of a free and fair election,” Bourdeaux said. “If these actions do not qualify as impeachable offenses in the eyes of my colleagues, then I don’t know what would. At such a fragile moment for our country, where the very foundation of our democracy is at stake, political party must come second to doing what is right. I am cosponsoring articles of impeachment to uphold the Oath of Office I took eight days ago to support and defend the Constitution of the United States against all enemies, foreign and domestic. I urge my colleagues to join me.”

The impeachment process could begin as soon as Wednesday, following a final effort to ask Vice President Mike Pence to invoke the 25th Amendment to remove Trump from office, if a majority of the Cabinet also approves.

Majority Leader Steny Hoyer (D-Md.) sought on Monday morning to bring up for unanimous approval a resolution from Raskin that would urge Pence to begin the 25th Amendment process. Republicans objected to that action.

House Speaker Nancy Pelosi (D-Calif.) has said the chamber will hold a floor vote on the resolution Tuesday, before moving to the impeachment process.

The impeachment process would typically begin in the House Judiciary Committee, but it is expected to go directly to the full House. If the article of impeachment is approved, the Senate would then hold a trial, which Senate Majority Leader Mitch McConnell has said would not begin until Jan. 19, the day before Biden is set to be sworn in.

At least two Senate Republicans have called for Trump to resign: Sens. Lisa Murkowski of Alaska, and Pat Toomey of Pennsylvania.

Toomey said in broadcast interviews over the weekend that he believes Trump “committed impeachable offenses,” and suggested that the outgoing president could potentially face “criminal liability” related to the Capitol insurrection. But Toomey stopped short of saying that he would vote to convict Trump if the House does send over articles of impeachment.

“Whether impeachment can pass the United States Senate is not the issue,” Hoyer told reporters Monday morning, according to a pool feed.

“The issue is we have a president most of us believe participated in encouraging an insurrection and an attack on this building and on democracy and trying to subvert the counting of the presidential ballot.”

Here is a list obtained by States Newsroom of members from Georgia who have signed on to the impeachment resolution, as of Monday morning: 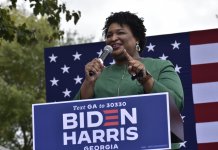