Gov. Brian Kemp is putting his shoulder behind a repeal of Georgia’s Civil War-era citizen’s arrest law, a totem used by local prosecutors last year to justify the killing of Ahmaud Arbery after three white men cornered the Black jogger on a suburban Brunswick street.

The Republican governor said it’s long past time to overhaul the 1863 law that allows regular citizens to arrest someone they suspect of committing a crime if police are not around.

The bill proposes to allow business owners to detain someone suspected of committing a crime on their property and let a homeowner defend themselves from someone breaking in. Off-duty police officers could make arrests outside their jurisdiction if it passes.

“This bill repeals the current Civil War-era statute to prevent the terrible consequences of a vague and outdated law,” Kemp said. “And it clarifies when a citizen, a business owner or law enforcement officer may reasonably detain an individual.”

Kemp and others at the press conference recounted their horror seeing the video showing the 25-year-old Arbery’s killing and their outrage learning that a prosecutor initially determined attempts to detain him were legal under Georgia’s citizen’s arrest law. Three men are charged with murder in Arbery’s killing after a video of their confrontation went viral.

Rep. Calvin Smyre, a Columbus Democrat and co-sponsor of the legislation, said it’s tragic that it took Arbery’s death to spur lawmakers to come together in an effort to upend the antiquated law.

“Sometimes, when you’re in a reflective mode, you look back and say, ‘How did we not do this earlier,'” Smyre said. “Philosophically, I always say there’s nothing to a hill for a climber. And that’s all we can do is keep climbing.”

Rep. Bert Reeves, a Marietta Republican and one of the governor’s floor leaders, is responsible for ushering the bill through the General Assembly to get it to Kemp’s desk for his signature.

Reynolds said it’s encouraging to see such wide-ranging support for the legislation that still allows people to protect themselves and the people close to them. A southeast Georgia prosecutor accepted the citizen’s arrest defense weeks after Arbery’s killing and then Reynolds quickly found reason for murder charges after taking on the investigation.

“The bill accomplishes that, but it also doesn’t allow vigilante actions by individuals, and I think the majority of us do not want to see that in our state,” he said.

A repeal of the 1863 citizen’s arrest law this legislative session would mark the second year in a row lawmakers will make groundbreaking changes to criminal justice policy after the release of the Arbery video. Last year the Legislature passed a hate crimes bill, an issue that failed to get much traction before.

Last spring, protesters took to the streets to call for social justice and and end to violence against Black people during demonstrations at the Capitol, across Georgia and the nation. Outrage grew in the months after Arbery’s February 2020 fatal shooting with the high-profile killings of George Floyd in Minneapolis, Louisville’s Breonna Taylor and Atlanta’s Rayshard Brooks.

In the aftermath, Georgia House and Senate committees held a series of hearings considering changes to the citizen’s arrest law and policing tactics.

The Georgia NAACP and Southern Center for Human Rights praised the renewed effort.

“It is high time to repeal Georgia’s citizen’s arrest law,” said Marissa Dodson, public policy director at the Center for Human Rights. “It is unnecessary, dangerous, and has held a central role in perpetuating anti-Black vigilante violence both recently and historically.”

“The House Democratic Caucus has been working on citizen’s arrest law since last year, but we’re also very, very vocal in wanting to have no-knock warrant legislation passed and to end the stand your ground law,” said Boddie, another sponsor of the governor’s citizen’s arrest bill.

Republicans, meanwhile, are reacting to 2020’s social unrest with an approach more sympathetic to law enforcement, including legislation that would limit the power of local officials to cut police department budgets and increased penalties for crimes committed during a protest.

Rep. Houston Gaines, an Athens Republican, said his bill barring local officials from cutting a police budget by more than 5% was in response to “efforts to defund the police” in Georgia and nationally.

He pointed specifically to a failed push in Atlanta. In Gaines’ district, the Athens-Clarke County Commission last year also decided against a plan to gradually reduce its police force while increasing funding for mental health services.

“These efforts are underway in our state and are certainly something that I think we need to fight against,” Gaines said Tuesday morning shortly before a House panel advanced his bill. 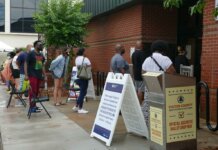