Lawmakers on a Georgia House panel are set to continue debating a sweeping election bill this week that is drawing fire from voting rights advocates and has sparked concerns among some of the state’s local election officials.

Election directors from across the state and representatives with voting rights organizations were among the witnesses who complained Friday before the House Special Committee on Election Integrity that the wide-ranging election bill filed this week by Republican Rep. Barry Fleming of Harlem will suppress voting if it passes. The committee has yet to vote on the bill, which was later modified.

Fleming has said he is seeking to ease some of the burdens on overworked election workers, provide more consistency for all 159 counties to run their elections, and restore confidence in the election system.

The bill is one of many GOP-backed voting bills filed this legislative session that follow the unfounded claims of widespread voting irregularities and fraud that some supporters of former President Donald Trump say denied him a second term. President Joe Biden narrowly won Georgia in November to become the first Democrat to win the state in three decades.

Election directors, from heavily populated communities like Cobb County as well as rural parts of Georgia like Heard County, cautioned that making election laws too uniform takes away from the flexibility needed in jurisdictions both small and large.

Cindy Battles, policy and engagement director for Georgia Coalition for the People’s Agenda, said that the proposals need much more debate and that they hold potentially devastating consequences for low-income voters, minorities, seniors and many others without easy access to polling places.

Under the proposal, every election office must hold three weeks of early voting from 9 a.m. to 5 p.m., with the option to expand it 7 a.m. to 7 p.m. It also eliminates Sunday voting, a popular day for Black churches to organize efforts to get voters out to the polls.

Fleming’s bill also mandates that absentee drop boxes are located inside an early voting site, restricted to the same hours as early voting, and be kept under the supervision of an election staffer or security guard.

Drop boxes became a popular option for many Georgians voting absentee last year after the state election board approved an emergency rule allowing the drop boxes during the pandemic. A record 1.3 million Georgian voters cast an absentee ballot in the November election.

The drop boxes were available around-the-clock as long as they were on government property with 24-hour video surveillance.

“Between the mistrust of the mail, the avoidance of crowds because of the pandemic, and the confidence voters had that the ballot was delivered, having them outside is what made them effective,” said Lowndes County Elections Supervisor Deb Cox.

Rep. Chuck Martin, an Alpharetta Republican, said the legislation lowers the likelihood of ballot harvesting, where someone is improperly dumping ballots into a box.

“The best way to do that is to empower voters with lots of options to vote, to return their ballots and do it on their own so that they don’t have to rely on somebody else,” she said.

“We’re looking for something a little bit easier to work with so that these various boards of elections when they look at them, they see something different than a digitized signature that doesn’t match up,” he said.

The new ID requirement has the backing of influential Republican leaders, including Gov. Brian Kemp and Secretary of State Brad Raffensperger, who have said they favor moving to a more objective verification system.

More than 99% of registered voters have a government ID number or can verify who they are through their date of birth and final four digits of their Social Security number, said Ryan Germany, an attorney for the Secretary of State’s Office.

“The motivation behind slashing the times that we’re going to do early voting, putting more requirements on absentee ballots, is taking us backward,” she said. 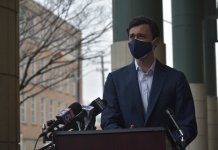