While state lawmakers passed expansive new voting restrictions Monday, dozens of protesters gathered outside the Gold Dome for a 12-hour rally against changes they say make it harder for Black Georgians to cast a ballot.

“They need to do the will of the people,” said Cyntha Bohannon-Brown of Rex. “By keeping people who are not able to get to the ballots from voting, they’re basically not doing their job.”

The rally was organized by the Georgia NAACP, the Southern Poverty Law Center Action Fund and the American Civil Liberties Union and other voting rights activists. Some participants made a point to hold vigil outside the Capitol from 5:31 a.m. to 5:31 p.m. in protest of the bill, House Bill 531. 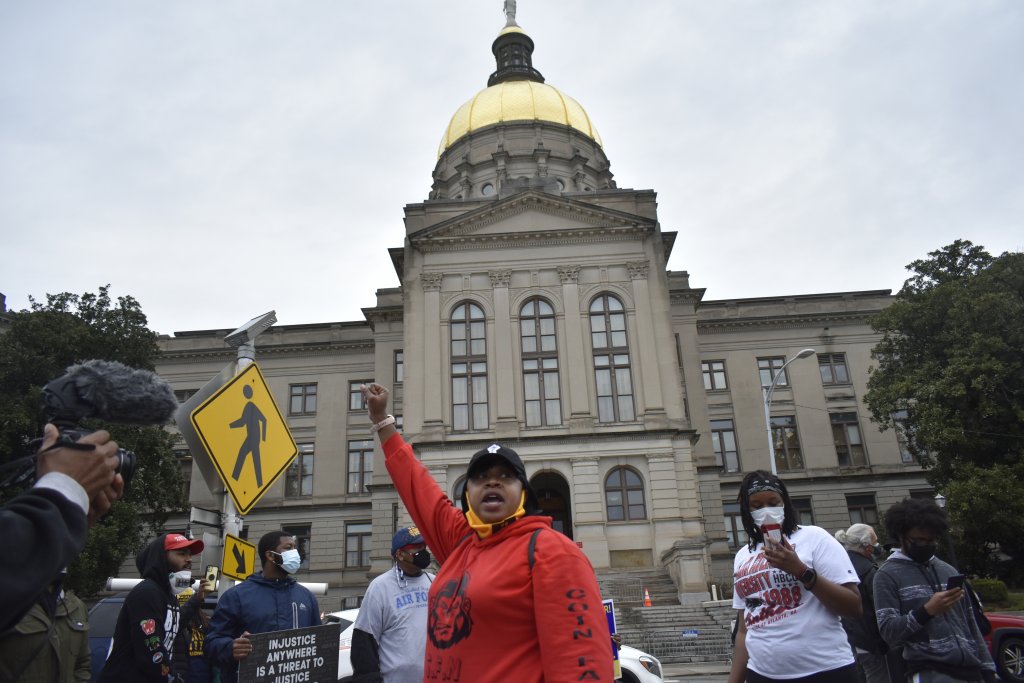 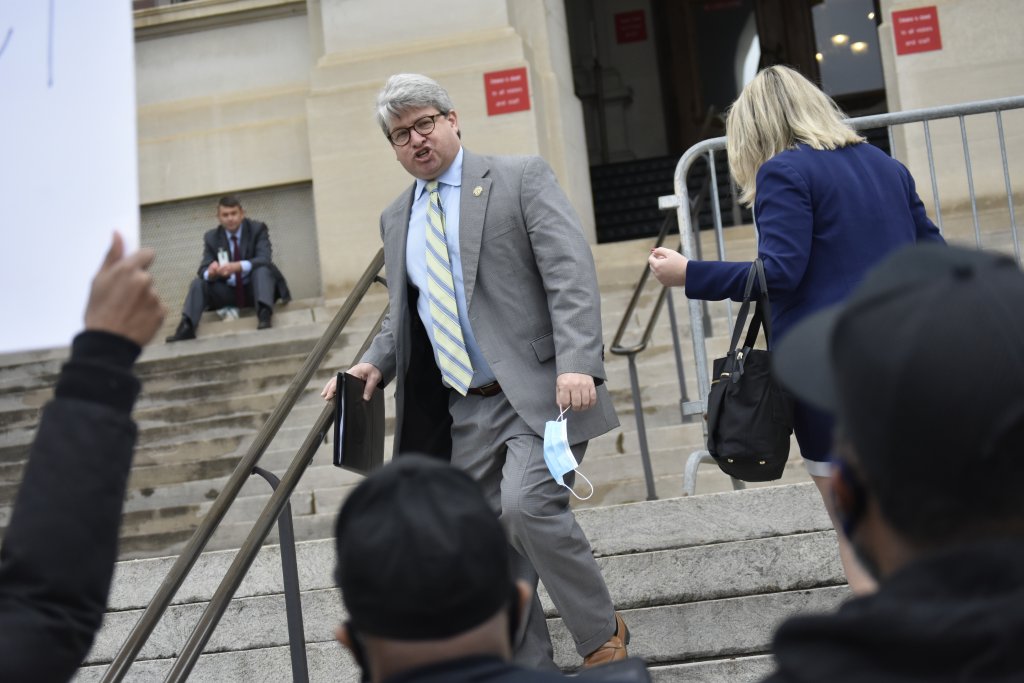 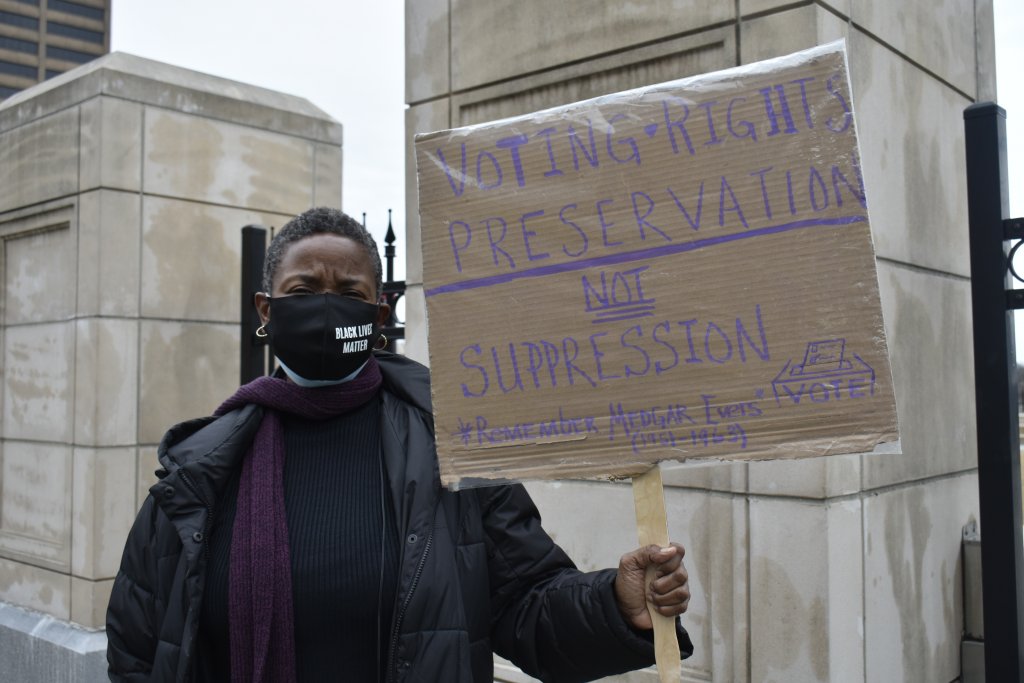 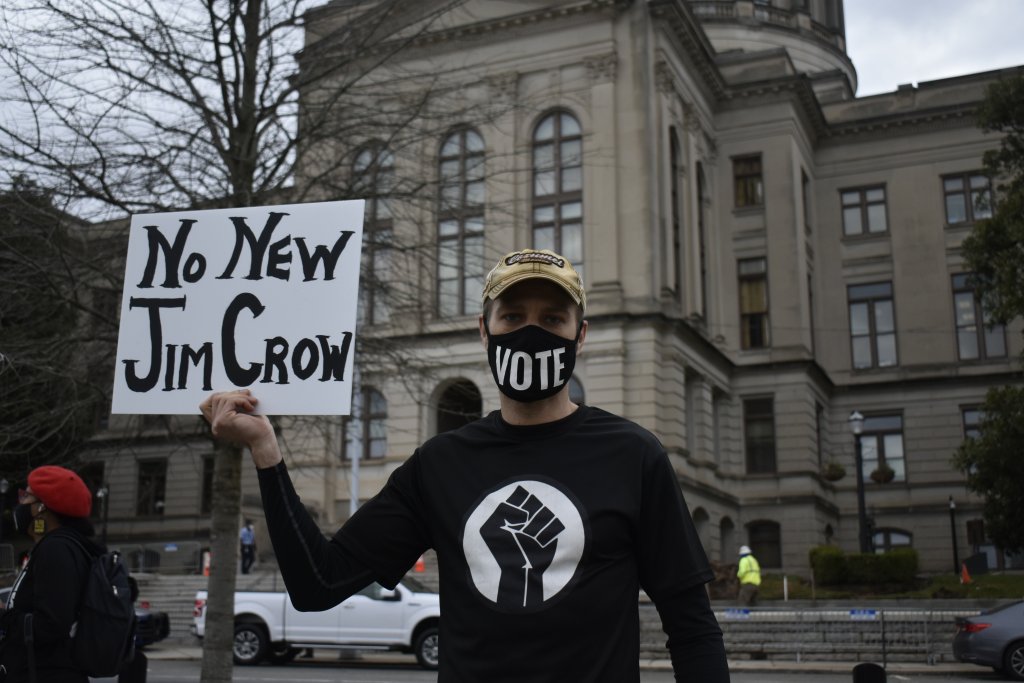 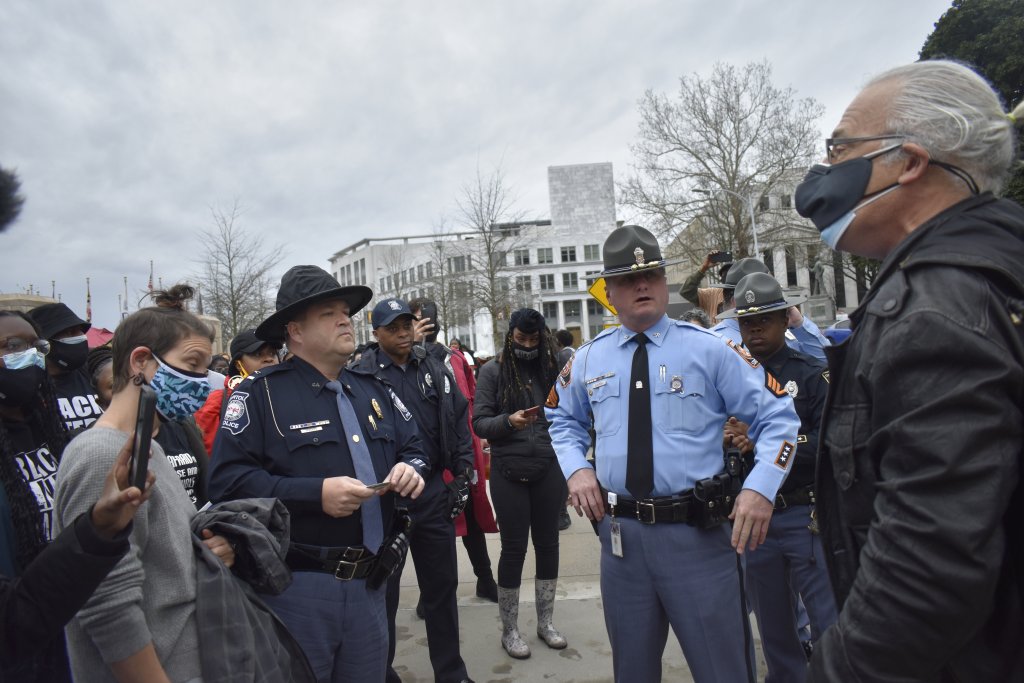 Police officers walked George Basco, right, out of the Capitol, after they said he caused a disturbance. Ross Williams/Georgia Recorder 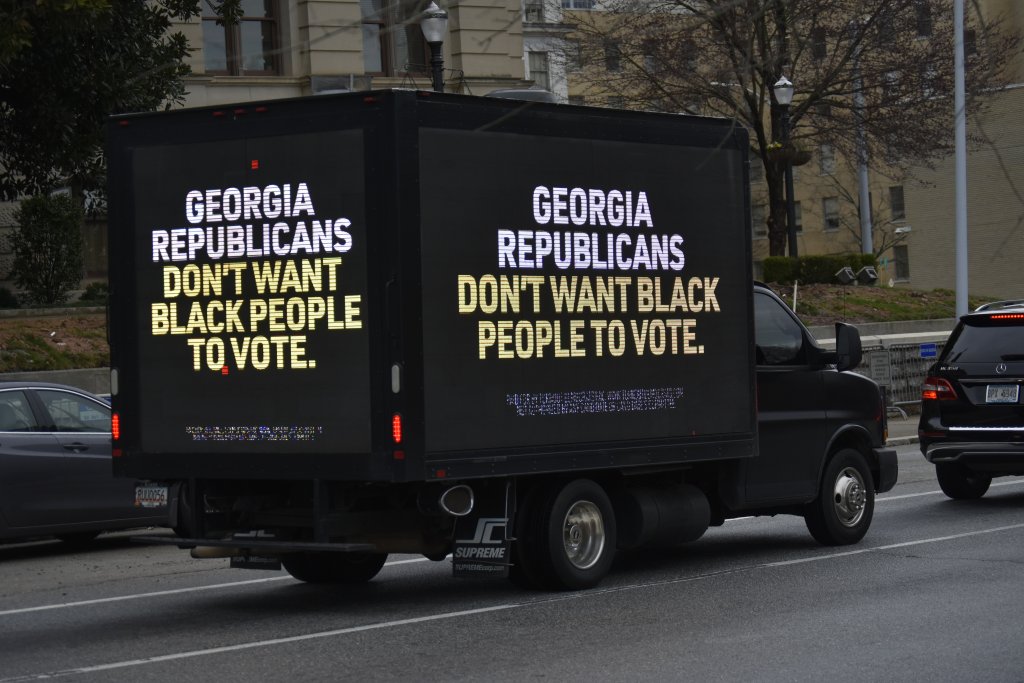 This provocative truck has been circling the Capitol for days. Protesters clapped as it passed by Monday. Ross Williams/Georgia Recorder. 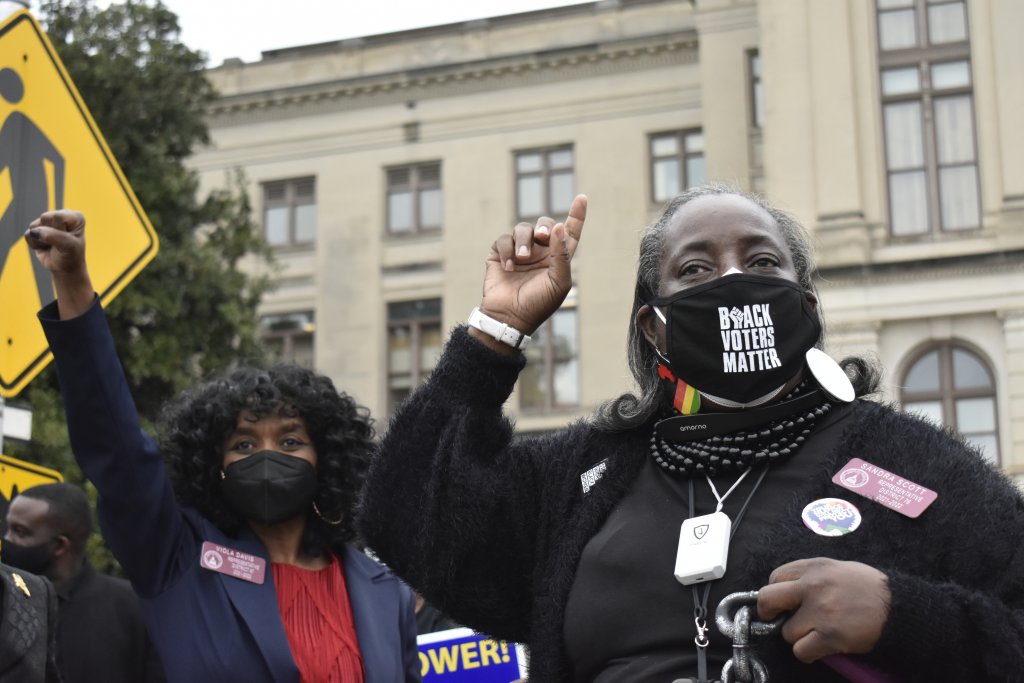 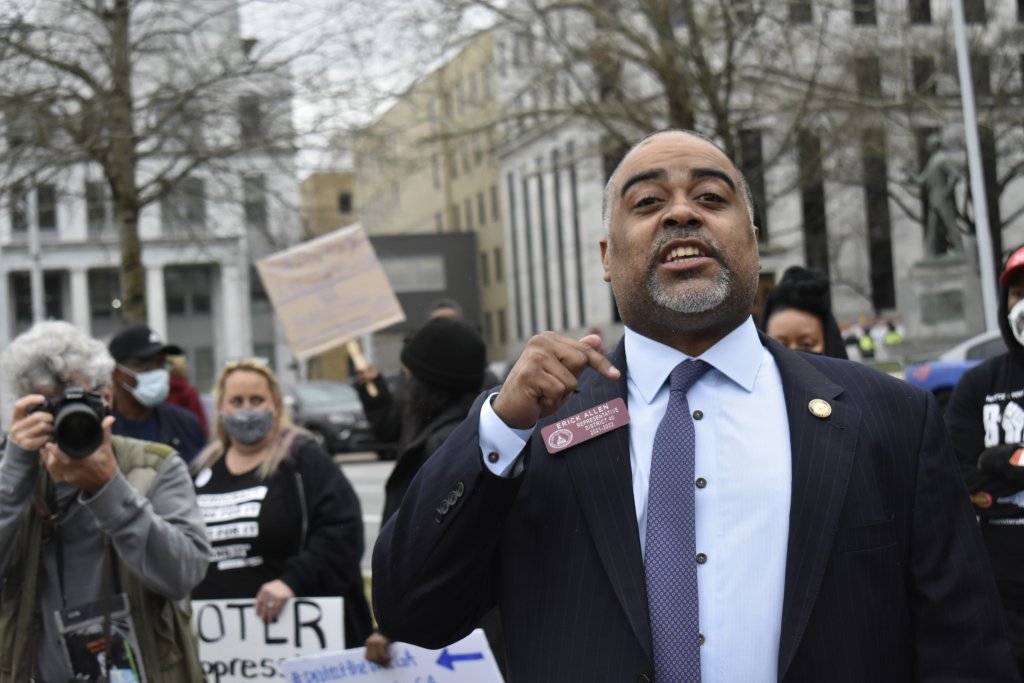 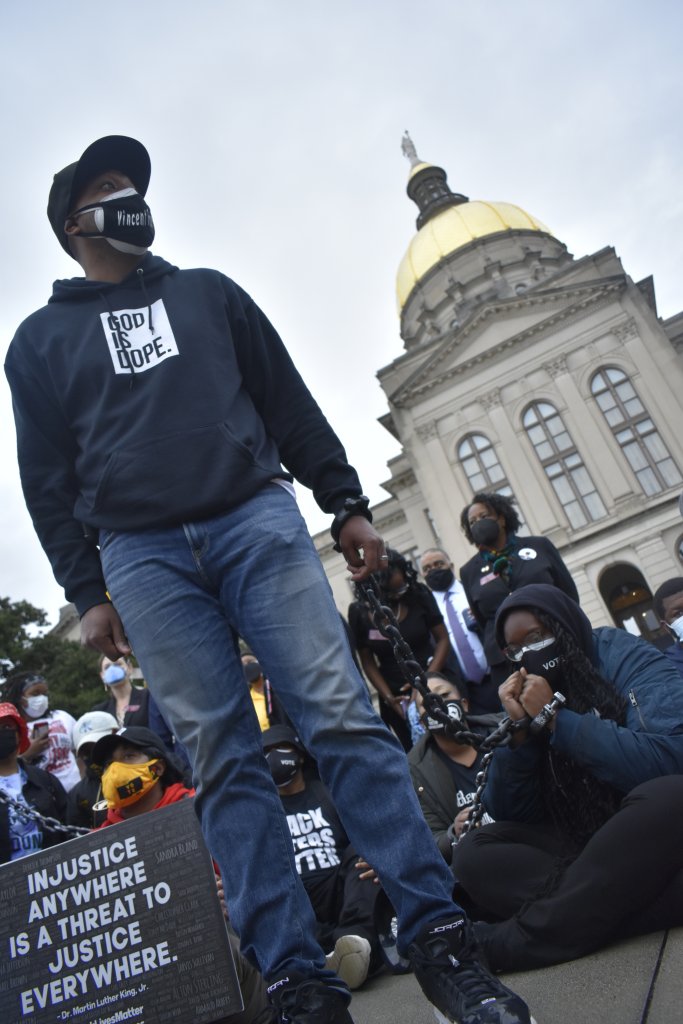 Dontaye Carter, communications chair for the Fulton County Democrats, led a group of protesters to the Capitol in chains. Ross Williams/Georgia Recorder.

Among the protesters was Reginesha Bazz. She knocked on doors to campaign in January’s historic U.S. Senate runoff elections and said she met many people who would not have been able to vote under the rules the House legislation would establish. The legislation sponsored by Harlem Republican Rep. Barry Fleming proposes to limit early voting days and require ID to cast an absentee ballot.

“A lot of people weren’t able to vote due to scheduling and accessibility, but this past runoff election made that accessible,” she said. “Now that access is being confined and restricted with this bill. The only thing missing from this bill is a literacy test.”

South Cobb state Rep. Erick Allen also invoked Georgia’s Jim Crow history of racist voter suppression. He was one of several House Democrats to come outside the Capitol and address the crowd.

“The excuse they are giving to suppress the vote does not make sense. When I was a kid, I didn’t even have a dog because my grandparents and parents had dogs sicced on them when they went to go vote,” Allen said. “I will be damned if I let the fight of my forefathers, my ancestors who are looking at me, if I roll over and lay down and allow them to do this. So we’ll fight in there, you fight out here, and we will win.”

The rally was loud and at times emotional, but it remained peaceful.

Two protesters were escorted from the Capitol and sent home with trespass notices from Capitol Police during the demonstration after police said they caused a disruption by addressing lawmakers from the House gallery.

“I caused a disturbance because until white people are disturbed as frequently as Black people are oppressed by racism, nothing’s going to change,” said George Basco, adding that he acted on his own and is not affiliated with the organizers.

Protesters spotted Gabriel Sterling, a top aide working with Secretary of State Brad Raffensperger’s office, walking into the Capitol, and shouted for him to comment on HB 531.

“I’ve got to go to work, guys,” Sterling said, eliciting groans from the crowd.

Several protesters crossed the street and spoke briefly with Sterling from across the barriers surrounding the Capitol.

Sterling, a Republican and the state’s voting system manager, became a national figure after he spoke out against conspiracy theories fostered by then-President Donald Trump and other Republicans who claimed there was major voting fraud in Georgia, especially in Fulton County. Multiple audits found no evidence of those claims.

The Georgia ACLU Political Director Christopher Bruce said the bill is a love letter to those who buy into those discredited theories.

“You have a twice-impeached president who peddled nonstop lies and misinformation about the election trying to bully our top elected officials into illegally throwing out ballots, that’s who this bill is for,” he said. “It’s for the unethical lawyers on his team who bogged down our judicial system when others were hurting.”

Computer programmer Micah Wedemeyer worked as assistant poll manager at a site in Fulton County during the November and January elections. He came to the protest with a sign reading “No New Jim Crow.”

He said he was aghast when he heard the claims of election fraud in Georgia and views the proposed legislation as an attack on his fellow poll workers.

“HB 531 and the senate bill are sort of a slap in the face to all the election workers that worked really hard to run a great election,” Wedemeyer said. “There’s no need for any of this. We did a good job. And the secretary of state needs to come out and say that, that all of this is completely unnecessary, and they need to focus on expanding voter access, not restricting it.”

The bill passed the House 97-72 and now heads to the Senate. If it passes there and receives Gov. Brian Kemp’s signature, it will likely face legal challenges.

The state Senate is also pressing forward with legislation to make extensive changes to absentee voting rules and early voting, and the dozens of election bills stacking up are training a national spotlight on Georgia.

Congressional Democrats have proposed new voting protections, and President Biden has indicated support for the John Lewis Voting Rights Act, which, if it passes Congress, would limit state’s rights to change their election laws.

Protesters said they expected Monday’s vote would not go their way, but they vowed to fight on.

“It was kind of expected, but you wish somebody would have had a change of heart,” said Porchse Miller of Atlanta. “As a human, yes, I’m hurt, but as a warrior, we’ve still got to fight.”

That fight will continue even if HB 531 becomes law, said Toni Watkins, deputy organizing director at the New Georgia Project.

“We will roll our grandparents to the polls, we will print out the copies for them, we will do what it takes because we are here, and we are not going anywhere,” she said. “And as much as you try to suppress our votes, you won’t. You won’t suppress our spirit, our energy, our work.”

Before joining the Georgia Recorder, Ross Williams covered local and state government for the Marietta Daily Journal.Williams' reporting took him from City Hall to homeless camps, from the offices of business executives to the living rooms of grieving parents. His work earned recognition from the Georgia Associated Press Media Editors and the Georgia Press Association, including beat reporting, business writing and non-deadline reporting. A native of Cobb County, Williams holds a bachelor’s degree in English from Atlanta's Oglethorpe University and a master’s in journalism from Northwestern University.