Time to take off the mule blinders

Guest columnist Dink NeSmith muses that considering many of the decisions made today regarding the environment, too many people are wearing blinders. Georgia Renewable Power in Colbert is asking the state for permission to dump wastewater from its plant into a nearby creek. File/Georgia Recorder (2019)

If your great-grandfather was a farmer, he probably didn’t start out plowing with a tractor. More than likely, mules or horses first pulled his implements through the fields. My great-grandpa Ezra McNeal was a mule man. And to keep his mules from being distracted, the bridle had leather flaps on either side of the animal’s eyes to keep it focused straight ahead. 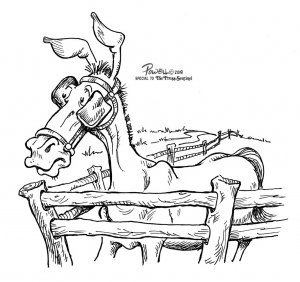 Considering many of the decisions made today—regarding the environment—I believe too many people are wearing blinders. By ignoring all the consequences of their choices, the outcomes are often mule-headed. (And I apologize to my smarter-than-the-average mule, Maggie, for the analogy.)

Georgia Renewable Power (GRP) in Colbert has a request, before Georgia’s Environmental Protection Division (EPD), to dump its wastewater into Beaverdam Creek. The boundary stream divides portions of Madison and Oglethorpe counties. The average daily volume of the biomass energy plant’s release is estimated at 273,000 gallons.

What’s in the water?

Bad stuff, including chloroform, cyanide and copper, along with oil and grease. That wastewater into Beaverdam Creek will flow into the Broad River, which runs under Georgia’s longest covered bridge at Watson Mill State Park. And the questionable stuff runs downhill into the Savannah River, eventually emptying into coastal Georgia.

GRP is currently paying to treat its wastewater, as it should. Dumping untreated wastewater would boost the company’s profits, while putting the environment—especially our water—at risk. My guess is that greed is the reason GRP has been wearing blinders, focusing only on its bottom line.

If the EPD is also wearing blinders, I hope our “environment protectors” will yank them off. The EPD needs to see the total picture—including the adverse consequences—and deny GRP’s permit request.

Georgia Power provided millions of us electricity by burning coal. In return—over those years—the utility raked in billions of dollars in profits. To its credit, Georgia Power is quitting coal. But that leaves the problem: “What to do with more than 50 million tons of toxic coal ash?”

Again—just as GRP—Georgia Power must be focusing more on profits, versus what’s best for Georgians and our environment. Leaving coal ash in unlined and leaking ponds—sitting in groundwater—is less expensive.

Last week the House committee on natural resources and environment recommended that Georgia Power monitor its coal-ash ponds for 50 years. Friday the full House passed the measure. That’s better than 30 years. But lawmakers, why not take off your blinders? Tell Georgia Power to build lined pits—on its property—and get that toxic coal ash out of the water.

Conjured up by State Sen. Tyler Harper of Ocilla, this proposed measure is a real stinker. He chairs the senate’s committee on natural resources and environment. In the past, rural Georgia has been targeted with unwelcomed sludge dumping, in the name of soil amendments and fertilizer. Some of that sludge, as an example, included chicken parts that rot and mess that would make a buzzard puke.

Neighbors objected to the stench, and lawmakers passed House Bill 1057 in 2019. Sen. Harper wants to gut those protections. Suggested revisions include establishing a new buffer for the sludge dumpers—a 100-foot setback from adjoining property. Why not just dump the foul mess on your neighbor’s back porch?

General Assembly, if you are wearing blinders on this bill, please rip them off. You need to see the awful consequences of SB 260 and dump it.

In all three examples, there is no right way to do something that is mule-headed.

Time to take off the mule blinders