Reporting on wait times, mix-ups and whatever news breaks

Voters will head to the polls in the first major statewide test of Georgia’s 2021 election overhaul. The race for governor, U.S. Senate and other high-stakes contests drew a record number of early voters this month. John McCosh/Georgia Recorder (File)

The Georgia Recorder staff is fanning out on Election Day to report from precincts, the secretary of state’s war room and from communities that will select winners in some of the most fiercely fought campaigns. States Newsroom Democracy Reporter Kira Lerner joins the team to watch for problems at the polls.

CALHOUN – North Georgia’s Gordon County is Trump country. Voters here gave the former president more than 80% of the vote in 2020, and conservative stalwart Congresswoman Marjorie Taylor Greene is expected to glide to an easy primary win there tonight.

Trump’s word is important there, but Republican voters at the Soronaville Community Center outside Calhoun Tuesday afternoon said it’s not their only consideration.

Keith Cochran, who works in city government, said he voted for Gov. Brain Kemp over the Trump-endorsed former Sen. David Perdue because he likes the way he’s run the state over the last four years, citing the recent fuel tax cut and school COVID-19 policies. He’s also a dyed-in-the-wool fan of Greene.

Trump’s endorsement matters, but not more than what he’s seen with his own eyes, he said.

“(Trump) is a nut, but I think he’s for the people also,” he said. “On the other hand, Biden, he’s giving money away, so we like that, but somebody’s got to pay the price.”

“I take what he says with a grain of salt,” he added.

Others said they have grown disillusioned with Trump following his presidency.

“His endorsement don’t mean nothing to me,” said truck driver Greg Hendrix. “I mean, Trump done good while he was president, but from the election on, he showed us what type of person he was, and I don’t need nobody like that representing our country.”

Polling suggests Perdue and other Trump-backed candidates may be in for a rough night. Watch the Georgia Recorder for updates throughout the day.

This post was updated 3:50 p.m. May 24 to include reports from the secretary of state’s office that poll hours are extended at all Georgia voting locations that had delays earlier Tuesday.

Secretary of State Brad Raffensperger said Tuesday afternoon that the reports of long lines were minimal across the state as his staff continued to monitor any problems that might come up throughout ‌Election ‌ Day.

Two Fulton precincts – Creel Park and Hopewell Middle School – and one each in Chatham and Macon-Bibb County will extend their hours after‌ ‌7‌ ‌p.m. because they opened late on Tuesday.

“Overall elections are running smoothly and we don’t have much else to report right now and I think that’s a good thing,” Raffensperger said at his early afternoon press conference

Fulton interim director of elections Naomi Williams said besides those hiccups voting has gone well so far on Election Day after more than 91,000 residents cast ballots during the early voting period.

Williams said so far the number of absentee ballot rejections related to the new absentee ID law has been minimal and that those voters are being notified to try to get it resolved.

However, Harold Franklin, chair of Georgia Election Protection for the Lawyers’ Committee for Civil Rights Under Law, said extending hours due to early delays could be more complicated than in past elections.

“We’ve got a series of polling locations that opened very late. We are hopeful that they will extend the poll hours but we at least are getting some indication that some of them will not voluntarily do that,” Franklin said.

“We’re waiting to hear back on what their position will be.”

Franklin said he’s not sure why so many polling locations opened late, but resolving the issue has become more difficult since Georgia passed its omnibus voting law last year.

“Typically in the past, we would reach out to the election official for the county at issue, they would call the polling location and tell them to extend the hours, and they did,” he said. “Now, we will likely have to secure affidavits with details in order to get the same thing accomplished.”

He explained that under SB 202, election administrators no longer have the authority to extend polling locations themselves. The new law requires that a court issue a specific finding of fact in order to extend voting hours.

“There has to be an order sought with the court with specific findings of fact as to the late openings and the need for an extension,” he said. “The issue is going to be whether the county election folks will say, ‘We want this’ or whether they will oppose efforts to try to extend it.”

A total of five precincts across Fulton, Macon-Bibb and Chatham counties will remain open up to an hour past 7 p.m. after technical issues led to delays in the morning.

Raffensperger said this the cause of the delays ranged from a power outage to technical issues such as later arriving equipment but that that election officials were able to get judges to order extended voting times.

Other Election Day headaches include voters trying to find their correct precinct using the state’s website.

Some voters have shown up at polling places based on what’s on the state’s My Voter Page and are not at the correct polling place, Franklin said. Under new law, if voters show up before 5 p.m. they cannot vote a provisional ballot.

Raffensperger said it’s too early to tell if the turnout will match the primary record 850,000 ballots cast during early voting period, but that the start of voting saw a large number of people come out before dipping for‌ ‌the‌ ‌rest‌ ‌of‌ ‌the‌ ‌morning.

“Counties have really stepped up,” he said. “We’re in a post- COVID environment so you don’t have all those issues from back two years ago but the counties have done a good job”

Democrat Stacey Abrams told a large group of reporters gathered outside an Atlanta polling place Tuesday morning that Election Day marks the “beginning of the next phase of this campaign.”

Abrams is running unopposed for the Democratic nomination and will emerge tonight as the official nominee. Polls suggest she is headed toward a rematch with Gov. Brian Kemp, who faces Trump-endorsed former U.S. Sen. David Perdue in the GOP primary. She narrowly lost to Kemp in 2018.

Kemp and Perdue have been sparring for months over who is better positioned to beat Abrams in the fall.

Republicans have recently seized on a comment Abrams made to Gwinnett County Democrats where she said Georgia was the “worst state in the country to live,” referring to quality of life statistics like the state’s dismal maternal mortality ranking.

Perdue referenced the comment in controversial remarks made to his supporters Monday evening in Dunwoody. “Hey, she ain’t from here. Let her go back to where she came from. She doesn’t like it here,” he said.

Abrams, speaking to reporters gathered outside of Kirkwood’s Israel Baptist Church, declined to specifically respond to Perdue’s remarks Tuesday but had this to say:

“The challenge I have is that the answer from Republicans, from our former senator to our current governor, is to fight me instead of fighting the problems that are facing Georgia, and I urge everyone to pay less attention to rhetoric and more attention to the record and to the results, and I’m here to provide results for the future of Georgia.”

She referred to her original comment as “an inelegant delivery of a statement that I will keep making and that is that Brian Kemp is a failed governor who doesn’t care about the people in Georgia.”

With Gov. Brian Kemp ahead in the polls, former President Donald Trump doubled down on his endorsement of Kemp’s primary opponent, former Sen. David Perdue on the morning of Election Day.

“Kemp has been a very weak Governor—the liberals and RINOs have run all over him on Election Integrity, and more,” Trump said in a statement, using an acronym for Republicans in Name Only. “Most importantly, he can’t win because the MAGA base—which is enormous—will never vote for him.  We need strong leaders who will fight, and time is running out!”

If polling is accurate, Kemp is set to secure a large enough victory to avoid a June runoff.

Kemp and Trump were once allies, but they split after the 2020 election when Kemp refused to help overturn Trump’s loss in Georgia. The former president has endorsed a slate of primary challengers to incumbents he feels wronged him, including Secretary of State Brad Raffensperger and Attorney General Chris Carr.

Perdue has campaigned on the unfounded idea that the 2020 election was stolen and that Kemp and his allies are to blame.

Speaking to a conservative crowd in January, Perdue pledged to be Kemp’s biggest supporter should he be renominated, but he was less committal in remarks to reporters at a Monday rally.

When asked if he would accept the results of Tuesday’s election, Perdue replied: “Depends on if there’s fraud or not.” 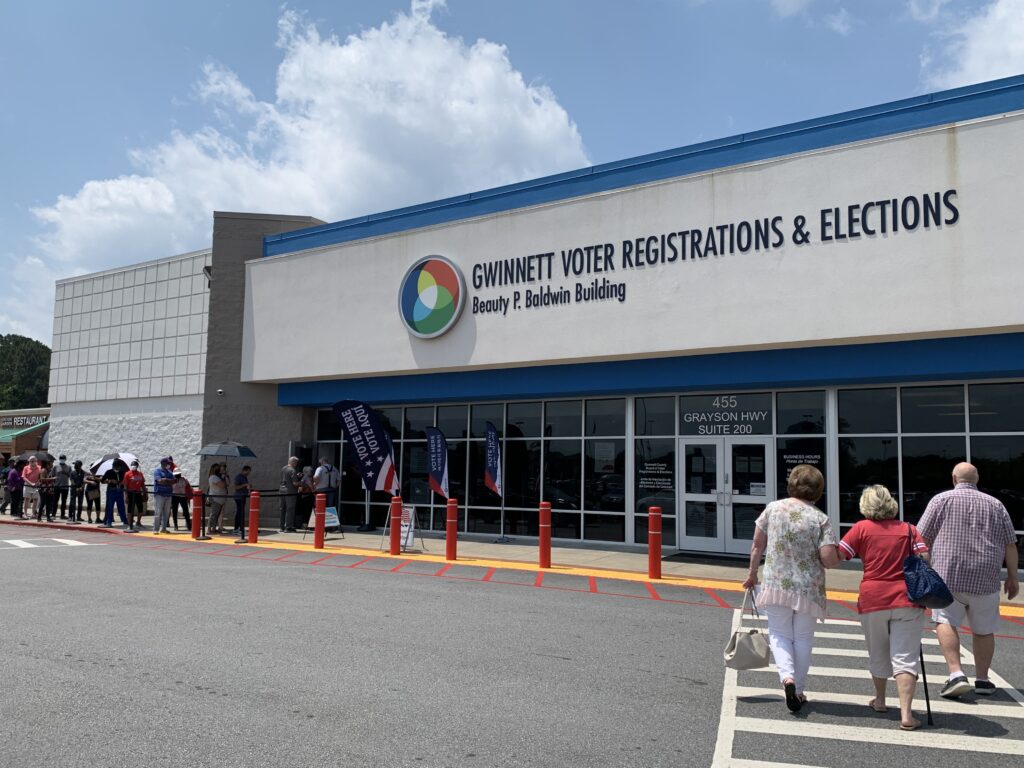 Election Day has arrived in Georgia and the primaries will determine the Republican and Democratic nominees for governor, U.S. Senate, Congress and a host of other statewide and local legislative races.

The polls opened at 7 a.m. and are set to remain open until 7 p.m. as election officials expect a strong turnout following a primary record of more than 850,000 ballots cast during the three-week early voting period.

Throughout the day, Georgia Recorder reporters Ross Williams and Stanley Dunlap, deputy editor Jill Nolin and States Newsroom democracy reporter Kira Lerner will keep you updated on what voters are experiencing at the polls with redistricting and a voting law overhaul impacting how and where people vote.

Among the things the Georgia Recorder team will monitor today are the wait times after larger in-person turnout at the end of the early voting led to some voters waiting a couple of hours to cast ballots at some metro Atlanta polling stations.

The top of this year’s ticket is highlighted by two Republican races in which Gov. Brian Kemp and former University of Georgia football star Herschel Walker are hoping their strong polling numbers play out as forecast today so they avoid a June runoff.

And while Democrats Stacey Abrams and U.S. Sen. Raphael Warnock don’t face opposition for governor and Senate, the field of candidates is crowded bidding for secretary of state, lieutenant governor and attorney general.

Please return to georgiarecorder.com throughout the day for updates.