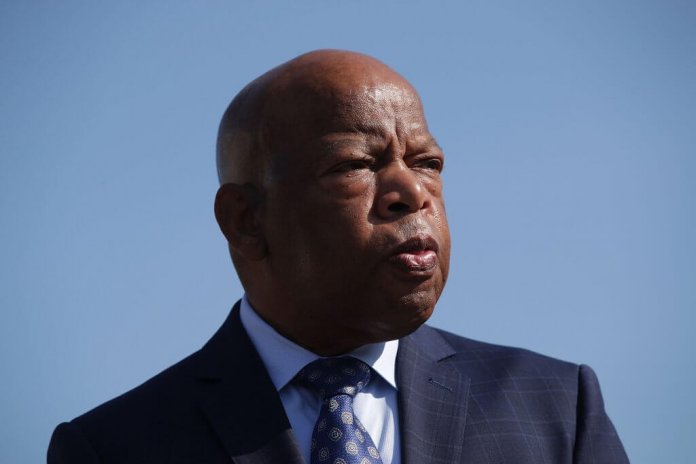 A bipartisan resolution in the Georgia legislature could send a statue of the late civil rights icon Congressman John Lewis to the U.S. Capitol’s National Statuary Hall.

Lewis’ statue would replace one of Alexander Stephens, vice president of the Confederacy and an ardent supporter of slavery and white supremacy.

Lewis, who died in July, was a civil rights hero who was beaten and arrested crossing the Edmund Pettus Bridge in Selma. The stand he and others took on the day known as “Bloody Sunday” is often credited with bringing about the passage of the 1965 Voting Rights Act. Lewis went on to serve 17 terms in Congress representing Atlanta as a Democrat.

“It is abundantly fitting and proper that this esteemed historic Georgia be appropriately recognized in the United States Capitol,” the resolution reads.

Each state Legislature can honor two people with a statue in the Capitol’s hall. Georgia’s other honoree is Dr. Crawford Long, a physician credited as one of the fathers of modern anesthesia.

Congress approved a bust of the Rev. Martin Luther King for display at the Capitol, but it isn’t counted as one of Georgia’s official statues.

The resolution unveiled Wednesday would create an eight-person committee to oversee the replacement of Stephens. Gov. Brian Kemp would appoint four members of the committee, including the chairperson, and Ralston and Lt. Gov. Geoff Duncan would each appoint two members.

If the measure passes, the committee’s duties will include selecting a sculptor, raising the private funds to pay for the statue’s creation and finding a suitable site for the Alexander Stephens statue once it is removed from the Capitol.

Under the resolution, the committee will be abolished Dec. 1.

Calls to memorialize Lewis at the Capitol began shortly after his death. Ten members of Georgia’s Congressional delegation from both parties wrote a formal letter to Lt. Gov. Duncan requesting the change.

“There is no Georgian more worthy of this great honor than John Lewis, who symbolizes for us not only what Georgia once was but what it can and should be,” the letter reads.

Duncan has expressed support for the switch, as has Kemp, who spoke at Lewis’ memorial in July.

“Today, we honored the life of Congressman John Lewis,” Kemp said in a tweet following the service. “By putting his statue in the U.S. Capitol, we can celebrate his legacy of service for years to come.”

Lewis himself called for Stephens’ statue’s removal in a 2015 interview with the Atlanta Journal-Constitution, and in 2017, two descendants of Stephens wrote a letter to then-Gov. Nathan Deal asking him to remove the statue.

Removing monuments to Confederates and white supremacists has become a culture war front as increased awareness of racial violence has led to renewed calls to remove monuments and rename facilities in Georgia and throughout the country in recent years. Some have resisted such measures, saying they amount to attempts to erase history.

Two military bases in Georgia, Fort Gordon near Augusta and Fort Benning near Columbus, could be among at least ten bases across the country to be renamed as part of a directive from Congress, and a University System of Georgia committee to rename campus buildings is expected to announce its conclusions early this year.