A growing number of lawmakers from Washington to Georgia’s Capitol support replacing a bust of the vice president of the Confederacy with one of the late Rep. John Lewis. Alex Wong/Getty Images

A call to remove a statue of the vice president of the Confederacy from the National Statuary Hall in the U.S. Capitol and replace it with a statue of Rep. John Lewis gained momentum Thursday as a majority of Georgia’s congressional delegation threw support behind a push by top state officials.

Gov. Brian Kemp tweeted Wednesday night that swapping out a statue of Alexander Stephens for one of Lewis would “celebrate his legacy of service for years to come.”

Lewis, an Atlanta Democrat, died July 17 after a six month battle with pancreatic cancer. One of the “Big Six” leaders of the civil rights movement, he served 17 terms as a member of congress representing Atlanta.

“John Lewis’ commitment to non-violence in the pursuit of justice for all inspired millions across Georgia, America, and the world,” U.S. Rep. Sanford Bishop, an Albany Democrat said. “Because of the life and activism of John Lewis, America is more fair, more just, and more kind.

“There is no better Georgian we could choose to represent our state in our nation’s Capitol than our beloved friend, colleague, and hero, John Robert Lewis,” Bishop added.

Kemp was among several elected officials who spoke during Wednesday’s ceremony for Lewis held inside the state Capitol.

Getting the statue inside the hall will first require the support of Georgia state legislators, a path that could be smoothed with powerful supporters like Ralston and Duncan.

Each state is entitled to place two statues of honorees in the hall, so adding Lewis’ statue requires removing one of the existing ones: Stephens or Crawford Long, an Athens doctor who is credited with pioneering the use of ether in a surgery.

U.S. Rep. Barry Loudermilk in July advocated for Stephens to be replaced by a statue of Martin Luther King Jr. Loudermilk did not sign the letter supporting honoring Lewis with the replacement.

A Georgia native, Stephens served as a state and U.S. lawmaker prior to the Civil War when he became a high ranking Confederate officer.

Stephens returned to the U.S. House of Representatives following the war and died four months into his term as Georgia governor.

The state provided his statue to the National Sanctuary Hall Collection in 1927. 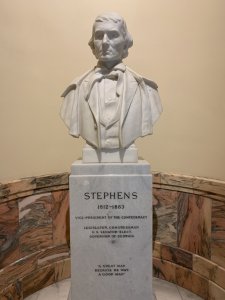 During protests against police brutality and demonstrations for social justice in recent months, Confederate monuments in Georgia have been removed from public spaces around the state.

On the other hand, Kemp called in National Guard troops to protect the statue of former Confederate general and Georgia Governor John B. Gordon on Capitol grounds. And both a bust and portrait of Stephens remain inside the state Capitol.

The removal of historic monuments has been criticized by President Donald Trump as an overreaction and an attempt to erase history that people can learn from.

Many Confederate monuments were erected long after the Civil ended, said Timothy Crimmins, a Georgia State University professor and director of the Center for Neighborhood and Metropolitan Studies.

For example, the Gordon statue dedication came less than a year after the 1906 Atlanta race riots where mobs of white people killed Black people in downtown Atlanta.

“It’s a version of history that was advanced as a part of an effort to suppress the rights of African Americans, and by leaving these monuments there, they lined up those efforts at repression,” Crimmins said in an interview last week with WABE.